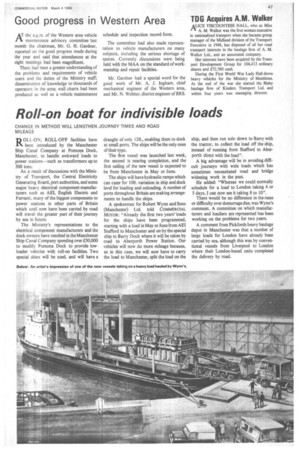 Page 49, 4th March 1966 — Good progress in Western Area
Close
Noticed an error?
If you've noticed an error in this article please click here to report it so we can fix it.
Keywords :

the a.g.m. of the Western area vehicle maintenance advisory committee last month the chairman, Mr. G. H. Gardner, reported on the good progress made during the year and said that attendances at the eight meetings had been magnificent.

There had been a greater understanding of the problems and requirements of vehicle users and the duties of the Ministry staff; dissemination of knowledge to thousands of operators in the area; wall charts had been produced as well as a vehicle maintenance schedule and inspection record form.

The committee had also made representation to vehicle manufacturers on many subjects, including the serious shortage of spares. Currently discussions were being held with the MAA on the standard of workmanship and repair facilities.

Mr. Gardner had a special word for the good work of Mr. A. J. Ingham, chief mechanical engineer of the Western area, and Mr. N. Webber, district engineer of BRS.