The call of duty 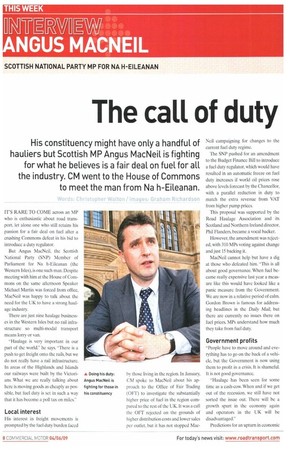 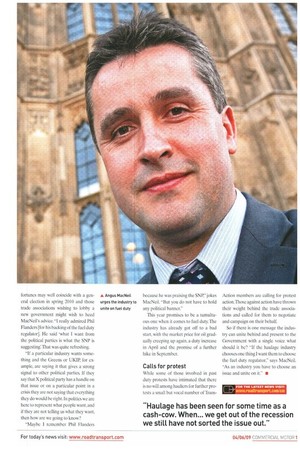 His constituency might have only a handful of hauliers but Scottish MP Angus MacNeil is fighting for what he believes is a fair deal on fuel. for all the industry. CM went to the House of Commons to meet the man from Na h-Eileanan.

IT'S RARE TO COME across an MP who is enthusiastic about road transport, let alone one who still retains his passion for a fair deal on fuel after a crushing Commons defeat in his bid to introduce a duty regulator.

But Angus MacNeil, the Scottish National Party (SNP) Member of Parliament for Na h-Eileanan (the Western Isles), is one such man. Despite meeting with him at the House of Commons on the same afternoon Speaker Michael Martin was forced from office, MacNeil was happy to talk about the need for the UK to have a strong haulage industry.

There are just nine haulage businesses in the Western Isles but no rail infrastructure so multi-modal transport means lorry or van.

"Haulage is very important in our part of the world," he says. "There is a push to get freight onto the rails, but we do not really have a rail infrastructure. In areas of the Highlands and Islands our railways were built by the Victorians. What we are really talking about here is moving goods as cheaply as possible, but fuel duty is set in such a way that it has become a poll tax on miles."

His interest in freight movements is prompted by the fuel duty burden faced by those living in the region, In January, C.M spoke to MacNeil about his approach to the Office of Fair Trading (OFT) to investigate the substantially higher price of fuel in the region compared to the rest of the UK. It was a cal! the OFT rejected on the grounds of higher distribution costs and lower sales per outlet, but it has not stopped Mac Neil campaigning for changes to the current fuel duty regime.

The SNP pushed for an amendment to the Budget Finance Bill to introduce a fuel duty regulator, which would have resulted in an automatic freeze on fuel duty increases if world oil prices rose above levels forecast by the Chancellor, with a parallel reduction in duty to match the extra revenue from VAT from higher pump prices.

This proposal was supported by the Road Haulage Association and its Scotland and Northern Ireland director, Phil Flanders, became a vocal hacker.

However, the amendment was rejected, with 310 MPs voting against change and just 15 backing it.

MacNeil cannot help but have a dig at those who defeated him. "This is all about good governance. When fuel became really expensive last year a measure like this would have looked like a panic measure from the Government. We are now in a relative period of calm. Gordon Brown is famous for addressing headlines in the Daily Mad, but there are currently no issues there on fuel prices. MiPs understand how much they take from fuel duty.

"People have to move around and everything has to go on the back of a vehicle, but the Government is now using them to profit in a crisis. It is shameful. It is not good governance.

"Haulage has been seen for some time as a cash-cow. When and if we get out of the recession, we still have not sorted the issue out. There will be a growth spurt in the economy again and operators in the UK will be disadvantaged."

Predictions for an upturn in economic fortunes may well coincide with a general election in spring 2010 and those trade associations wishing to lobby a new government might wish to heed MacNeil's advice. "I really admired Phil Flanders tfor his backing of the fuel duty regulator]. He said 'what I want from the political parties is what the SNP is suggesting: That was quite refreshing.

"If a particular industry wants something and the Greens or UKIP, for example, are saying it that gives a strong signal to other political parties If they say that X political party has a handle on that issue or on a particular point in a crisis they are not saying that everything they do would be right. In politics we are here to represent what people want, and if they are not telling us what they want, then how are we going to know?

"Maybe I remember Phil Flanders because he was praising the SNP," jokes MacNeil. "But you do not have to hold any political banner."

This year promises to be a tumultuous one when it comes to fuel duty. The industry has already got off to a bad start, with the market price for oil gradually creeping up again, a duty increase in April and the promise of a further hike in September.

While some of those involved in past duty protests have intimated that there is no will among hauliers for further protests a small but vocal number of Trans Action members are calling for protest action.Those against action have thrown their weight behind the trade associations and called for them to negotiate and campaign on their behalf So if there is one message the industry can unite behind and present to the Government with a single voice what should it be? If the haulage industry chooses one thing I want them to choose the fuel duty regulator," says MacNeil. "As an industry you have to choose an issue and unite on it." •

C-4 FOR THE LATEST HEWS VISIT: