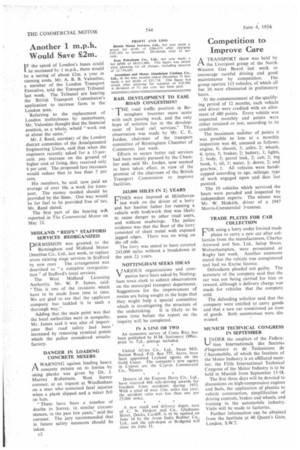 Page 40, 4th June 1954 — Another 1 m.p.h. Would Save £2m.
Close
Noticed an error?
If you've noticed an error in this article please click here to report it so we can fix it.
Keywords : London, Trolleybus, Transport, Law / Crime, Business / Finance

IF the speed of London's buses could I be increased by 1 m.p.h., there would be a saving of about £2m. a year in running costs, Mr. A. B. B. Valentine, a member of the London Transport Executive, told the Transport Tribunal last week. The Tribunal are hearing the British Transport Commission's application to increase fares in the London area.

-Referring to the replacement of London trolleybuses by motorbuses, Mr. Valentine thought that the financial position, as a whole, would "work out at about the same."

Mr. J. Reed, secretary of the London district committee of the Amalgamated Engineering Union, said that when the engineers recently asked for a 15-percent. pay increase on the ground of higher cost of living, they received only 6 per cent. The proposed fare increases would reduce that to less than 5 per cent.

His members, he said, now paid an average of over 10s. a week for transport. The money needed should be provided by the State. One way would be for fuel to be provided free of tax, Mr. Reed stated.

The first part of the hearing .wft reported in The Commercial Motor on May 21.