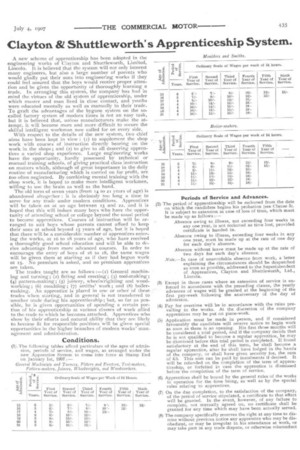 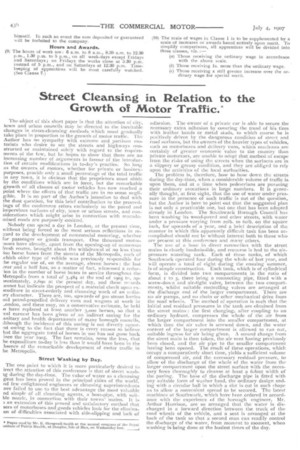 Page 3, 4th July 1907 — Clayton & Shuttleworth' s Apprenticeship System.
Close
Noticed an error?
If you've noticed an error in this article please click here to report it so we can fix it.

A new scheme of apprenticeship has been adopted in the engineering works of Clayton and Shuttleworth, Limited, Lincoln. It is believed that the system will not only interest many engineers, but also a large number of parents who would gladly put their sons into engineering works if they could feel assured that the boys would receive proper attention and be given the opportunity of thoroughly learning a trade. In arranging this system, the company has had in mind the virtues of the old system of apprenticeship, under which master and man lived in close contact, and youths were educated mentally as well as manually in their trade. To graft the advantages of the bygone system on the socalled factory system of modern times is not an easy task, but it is believed that, unless manufacturers make the attempt, it will become more and more difficult to secure the skilful intelligent workman now called for on every side.

With respect to the details of the new system, two chief aims have been kept in view : (I) to supplement the shop work with courses of instruction directly bearing on the work in the shops ; and (2) to give to all deserving apprentices a varied shop experience. Large engineering works have the opportunity, hardly possessed by technical or manual training schools, of giving practical class instruction on matters which, although of great importance in the daily routine of manufacturing which is carried on for profit, are t oo often neglected. By combining mental training with the shop work, it is hoped to make more intelligent workmen, willing to use the brain as well as the band.

The old term of seven years (from 14 to 21 years of age) is abandoned altogether : it is obviously too long a time to serve for any trade under modern conditions. Apprentices will be taken on at an age between 15 and 22, and it is hoped that this will induce many boys who have the opportunity of attending school or college beyond the usual period to become apprentices. Courses of instruction will be arranged to suit boys whose parents cannot afford to keep their sons at school beyond 55 years of age, but it is hoped that there will be a considerable number of apprentices entering the Works, at 16 to Tg years of age, who have received a thoroughly good school education and will be able to derive advantage from more advanced courses. In order to encourage the entry of boys of 16 to 18, the same wages will be given them at starting as if they had begun work at 15. No premium is asked, and no premium apprentices are taken.

The trades taught are as follows :—(f) General machining and turning ; (2) fitting and erecting; (3) tool-making ; (4) pattern-making ; (5) joinery, wheelwrighting and woodworking ; (6) moulding ; '(7) smiths' work ; and (8) boilermaking. An apprentice is placed in one or other of these. trades when starting, and in general is not transferred to 'another trade during his apprenticeship ; but, so far as possible, he is given opportunities of spending a certain portion of his apprenticeship at various classes of work allied to the trade to which he becomes attached. Apprentices who show by their efforts and natural ability that they are likely to become fit for responsible positions will be given special opportunities in the higher branches of modern works' management and administration.

(1) The following tables afford particulars of the ages of admission, periods of service, and wages, as arranged under the new Apprentice System to come into force at Stamp End on January 1st, 1907 :—

Periods of Service and Advances.

(2) The period of apprenticeship will be reckoned from the date on which the candidate begins his probation (see Clause 5). It is subject to extension in case of loss of time, which must be made up as follows :—

Absence owing to illness, not exceeding four weeks in any one year, is not reckoned as time lost, provided certificate is handed in.

Absence owing to illness, exceeding four weeks in any one year, must be made up at the rate of one day for each day's absence.

Absence without leave must be made up at the rate of two days for each day's absence.

Note.—In case of unavoidable absence from work, a letter explaining the circumstances should be despatched as soon as possible, addressed to the Superintendent of Apprentices, Clayton and Shuttleworth, Ltd., Lincoln.

(3) Except in those cases where an extension of service is enforced in accordance with the preceding clause, the yearly advances of wages will be granted at the beginning of the first pay-week following the anniversary of the day of admission,

(4) Pay for overtime will be in accordance with the rules prevailing in the works. At the discretion of the company apprentices may be put on piece-work.

(5) Application must be made in person, and if considered favourably the candidate will receive notice to begin work as soon as there is an opening. His first three months will be considered a trial period, and if the company decide that he is not qualified to become a regular apprentice, be may be dismissed before this trial period is completed. If found satisfactory at the end of this term, he shall become a regular apprentice, after he shall have lodged in the hands of the company, or shall have given security for, the sum of £5. This sum can be paid by instalments if desired. It will be refunded on the completion of the term of apprenticeship, or forfeited in case the apprentice is dismissed before the completion of the term of service.

(6) Apprentices shall be bound by the general rules of the works in operation for the time being, as well as by the special rules relating to apprentices.

(7) On the due completion, to the satisfaction of the company, of the period of service stipulated, a certificate to that effect will be granted. In the event, however, of any failure to complete, not mutually agreed on, no certificate shall be granted for any time which may have been actually served.

(8) The company specifically reserves the right at any time to dismiss without previous notice any apprentice who may be disobedient, or may be irregular in his attendance at work, or may take part in any trade dispute, or otherwise misconduct himself. In such an event the sum deposited or guaranteed be forfeited to the company,

(10) The scale of wages in Clause 1 is to be supplemented by a scale of increases or awards based entirely upon merit. To simplify comparisons, all apprentices will be divided into three classes, viz.: —

(a) Those receiving the ordinary wage in accordance with the above scale.

(b) Those receiving is. more than the ordinary wage.

(c) Those receiving a still greater increase over the ordinary wage for special merit.