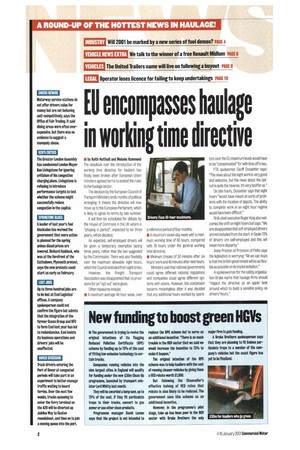 Motorway service stations do not offer drivers value for money but are not behaving anti-competitively, says the Office of Fair Trading. It said dining areas were often overexpensive, but there was no evidence to suggest a monopoly abuse.

The Greater London Assembly has condemned London Mayor Ken Livingstone for ignoring crfticism of his congestion charging plans. Livingstone is refusing to introduce performance targets to test whether the scheme might successfully reduce congestion in the capital.

A leader of last year's fuel blockades has warned the government that more action is planned for the spring unless diesel prices are lowered. Richard Haddock, who was at the forefront of the Cattedown, Plymouth protest, says the new protests could start as early as February.

Up to three hundred jobs are to be lost at Exel Logistics' offices. A company spokesperson could not confirm the figure but admits that the integration of the former Ocean Group and NFC to form Exel last year has led to redundancies. Exel insists its business operations and drivers' jobs will be unaffected.

Truck drivers entering the Part of Dover at congested periods will take part in an experiment to better manage traffic waiting to board ferries. Over the next few weeks, trucks queueing to enter the ferry terminal on the A20 will be diverted up Jubilee Way to Guston roundabout, and then on to join a moving queue into the port.