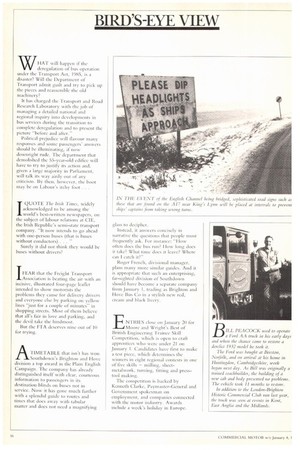 WI I AT will happen if the deregulation of bus operation under the Transport Act, 1985, is a disaster? Will the Department of Transport admit guilt and try to pick up the pieces and reassemble the old machinery?

It has charged the Transport and Road Research Laboratory with the job of managing a detailed national and regional inquiry into developments in bus services during the transition to complete deregulation and to present the picture "before and alter.•' Political prejudice will flavour many responses and some passengers' answers should be illuminating, if now downright rude. The department that demolished the 55-year-old edifice will have to try to justify its action and, given a large majority in Parliament, will talk its way airily out of any criticism. By then, however, the boot may he on Labour's itchy foot . . .

/QUOTE The Irish Times, widely acknowledged to be among the world's best-written newspapers, on the subject of labour relations at CIE, the Irish Republic's semi-state transport company. "It now intends to go ahead with one-person buses (that is buses without conductors) .

Surely it did not think they would be buses without drivers?

IFEAR that the Freight Transport Association is beating the air with an incisive, illustrated four-page leaflet intended to show motorists the problems they cause for delivery drivers and everyone else by parking on yellow lines "just for a couple of minutesin shopping streets. Most of them believe that all's fair in love and parking, and the devil take the hindmost.

But the FTA deserves nine out of 10 for trying.

ATM ETA BLE that isn't has won Southdown's Brighton and Hove division a top award in the Plain English Campaign. The company has already distinguished itself with clear, courteous infiirmation to passengers in its destination blinds on buses not in service. Now it has gone much further with a splendid guide to routes and times that does away with tabular matter and does not need a magnifying

Instead, it answers concisely in narrative the questions that people most frequently ask. For instance: -I low often does the bus run? Ilow long does it take? What tune does it leave? Where can I catch it?"

Roger French, divisional manager, plans many more similar guides. And it is appropriate that such an enterprising, far-sighted division of Southdown should have become a separate company from January I, trading as Brighton and Hove Bus Co in a stylish new red, cream and black livery.

ENTR1ES close on January 20 for Moore and Wright's Best of British Engineering Trainee Skill Competition, which is open to craft apprentices who were under 21 on January I. Candidates have first to make a test piece, which determines the winners in eight regional contests in one of five skills — milling, sheetmetalwork, turning, fitting and presstool making.

The competition is backed by Kenneth Clarke, Paymaster-General and Government spokesman on employment, and companies connected with the motor industry. Awards include a week's holiday in Europe.

BILL PEACOCK used to operate 12 Ford A A truck in his early day.e and when the chance came to restore a derelict 19.32 model he took it.

The Ford was bought at Beeston, Norliilk, and on arrival at his home in Huntingdon, Cambridgeshire, work began next day. As Bill was originally a trained coachbuilder, the building ofa new cab and body presented no problems. The vehicle took 11 months to restore.

In addition to the London-Brighton Historic Commercial Club run last year, the truck was seen at events in Kent, East Anglia and the Midlands.