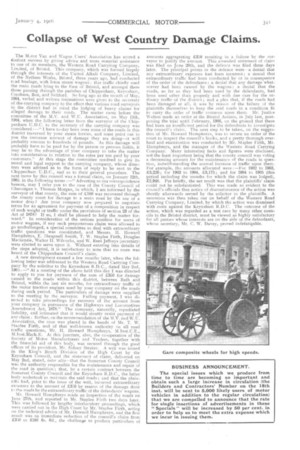 The Motor Van and Wagon Users' Association has scored a distinct success by giving advice and more material assistance to one of its members, the Western Road Carryinrg Company, Limited, of Bristol. This company, which was formed largely thrcugh the interests of the United Alkali Company, Limited, of the Netham Works, Bristol, three years ago, had conducted read haulage, with 5-ton steam wagons : this traffic chiefly used the main roads lying to the East of Bristol, and amongst them those passing through the parishes of Chippenham, Keynshani, Cotshain, Box, and Saltford. So long ago as the month of May, 1904, verbal and written intimations were given to the secretary of the carrying company to the effect that various road surveyors in the district had in mind the lodging of heavy claims for alleged damage to their roads. The matter came before the committee of the M.V. and V.U. Association, on May 11th, 1904, when the following letter from the surveyor of the Chippenham U.D.C. to the secretary of the carrying company was considered :—" I have to-day been over some of the roads in this district traversed by your steam lorries, and must point out to you the immense amount of damage they are doing—it will probably amount to hundreds of pounds. As this damage will probably have to be paid for by the person or persons liable, it may be to the advantage of your company to take the matter into consideration in relation to the rates per ton paid by your customers." At this stage the committee resolved to give its moral and legal support to the carrying company, whose directors were advised as to the form of reply to be sent to the Chippenham U.D.C., and as to their general procedure. The next move by this council was a formal claim, on January 12th, 1905, in thc following terms :—" Adverting to our correspondence hereon, may I refer you to the case of the County Council of Glamorgan v. Thomas Morgan, in which, 1 am informed by the surveyor of that county, the sum of £100 was recovered through the county court for damage to a main road by the use of a motor dray? Are your company now prepared to negotiate terms for an agreement for payment of a composition in respect of such weight or traffic tinder the provisions of section 23 of the Act of 1878? If so, I shall be pleased to help the matter forward." In consideration of the serious position for users of motor wagons, if any such preposterous claim were allowed to go unchallenged, a special committee to deal with extraordinary traffic questions VMS constituted, and Messrs. II. Howard Humphreys, E. Shrapnell Smith, T. W. Staplee Firth, Douglas Mackenzie, Walter II. Wilcocks, and W. Rees Jeffreys (secretaryi were elected to serve upon it. Without entering into details of the steps adopted, it is satisfactory to note that no more was heard of the Chippenham Council's claim.

A new development ensued a few months later, when the following letter was addressed to the Western Road Carrying Company by the solicitor to the Keynsham R.n.c., dated May 2nd, 190):—" At a meeting of the above held this 'day I was directed to apply to you for payment of the sum of £350 for damage caused to the roads within this district, between Bath and Bristol, within the last six months, for extraordinary traffic of the motor traction engines used by your company on the roads during such period. The particulars of damage were supplied to the meeting by the surveyor. Failing payment, T was directed to take proceedings for recovery of the amount from your company in pursuance of the Highways and Locomotives Amendment Act, 1878." The company, naturally, repudiated liability, and intimated that it would stoutly resist payment of any claim : further, on the recommendation of the M.V. and W.C. Association, the case was placed in the hands of Mr. T. W. Staplee Firth, and of that well-known authority on all road traffic questions, Mr. II. Howard Humphreys, M.Trist.C.E., M.Inst.Mech.E. At this juncture, also, the co-operation of the Society of Motor Manufacturers and Traders, together with the financial aid of this body, was secured through the good offices of its president, Mr. Sidney Straker. A writ was issued in the King's Bench Division of the High Court by the Keynsham Council, and the statement of claim, delivered on May 2nd, stated, infer alia —that the Somerset County Council was the authority responsible for the maintenance and repair of the road in question ; that, by a certain contract between the Somerset County Council and the Keynsham R.D.C., the latter body undertook to maintain the said roads ; and that the plaintiffs had, prior to the issue of the writ, incurred extraordinary exeenses to the amount of £350 by reason of the damage done

VI the roads by the extraordinary traffic of the defendants' wagons. Mr. Howard Humphreys made an inspection of the roads on June 27th, and reported to Mr. Staplee Firth two days later. This was followed by lengthy interlocutory proceedings, which were carried out in the High Court by Mr. Staplee Firth, acting on the technical advice of Mr. Iloward Humphreys, and the first result was an immediate reduction of the council's claim from £3)0 to £241 6s. 6d., the challenge to produce particulars of amounts aggregrating £30 resulting in a failure by the surveyor to justify the anemia. This amended statement of claim was filed on June 20th, and the defence was filed three days later. The principal points in the defence were a denial that any extraordinary expenses had been incurred ; a denial that extraordinary traffic had been conducted by cr in consequence of the order of the defendants ; a denial that any damage whatscever had been caused by the wagons ; a denial that the roads, so far as they had been used by the defendants, had been used other than properly and with due care for the ordinary traffic of the district ; and a plea that, if the roads had been damaged at all, it was by reason of the failure of the plaintiffs themselves to keep the said roads in a condition fit to carry the order of traffic common upon them. Mr. Justice Walton made an order at the Bristol Assizes, in July last, postponing the trial until February, 1906, on the ground that there had been an insufficient period for the defendants to investigate the council'sclaim. The next step to be taken, on the suggestion of Mr. Howard Humphreys, was to secure an order of the court to inspect the council's books, and a pretty thorough overhaul and examination was conducted by Mr. Staplee Firth, Mr. Ilumphreys, and the manager of the Western Road Carrying Company. Many interesting facts and figures were disclosed, not the least important being that the county council was voting a decreasing amount for the maintenance of the roads in question, notwithstanding the normal increase of traffic upon them. For example, the amounts allocated were :—For 1902 to 1903, £3,26; for 1903 to 1904, £.3,175; and for 1904 to 1905 (this period including the months for which the claim was lodged), £2,948. Put briefly, the net result was that the plaintiffs' claim could not be substantiated. This was made so evident to the cetaicil's officials that notice of discontinuance of the action was shortly afterwards served by the solicitor to the plaintiffs. A summons W AR then taken out on behalf of the Western Road Carrying Company, I,imited, by which the action was dismissed with costs against the Keynsham R.D.C. The outcome of the action, which was regarded as a test case by many other councils in the Bristol district, must be viewed as highly satisfactory for all parties whose interests are on the side of the defendants, whose secretary, Mr. C. W. Davey, proved indefatigable.