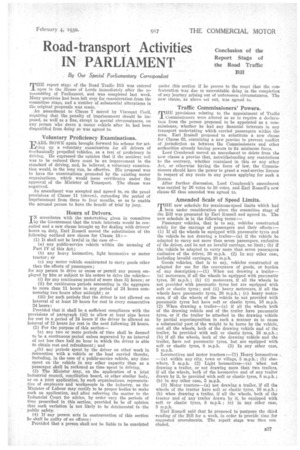 By Our Special Parliamentary Correspondent TE report stage of the Road Traffic Bill was entered upon in the House of Lords immediately after the reassembling of Parliament, and was completed last week. Many questions had been left over for consideration-from the committee stage, and a number of substantial alterations in the original proposals was made.

An amendment to Clause 7 moved by Viscount Cecil, requiring that the penalty of imprisonment should be imposed, as well as a fine, except in special circumstances, on any person who drove a motor vehicle after he had been disqualified from doing so was agreed to.

MIA ARL HOWE again brought forward his scheme for set ting up a voluntary examination for all drivers of mechanically propelled vehicles, as a test of proficiency in driving. He expressed the opinion that if the accident roll was to be reduced there must be an improvement in the standard of driving, and, he believed, a voluntary examination would, in the long run, be effective. His proposal was to have the examinations promoted by the existing motor organizations, which would issue certificates under the approval of the Minister of Transport. The clause was negatived.

An amendment was accepted and agreed to, on the penal provisions of Clause 11 (eleven), extending the period of imprisonment from three to four months, so as to enable the accused person to have the benefit of trial by jury.

IN accordance with the undertaking given in committee by the Government that the trade interests would be consulted and a new clause brought up for dealing with drivers' hours on duty, Earl Russell moved the substitution of the following outlined new clause for Clause 18:— (1) It shall not be lawful in the case of—

(a) any public-service vehicle within the meaning of Part IV of this Act; (b) any heavy locomotive, light locomotive or motor tractor ; or (c) any motor vehicle constructed to carry goods other than the effects of passengers ; for any person to drive or cause or permit any person employed by him or subject to his orders to drive the vehicle (i) for any continuous period of more than 5 hours ; or (ii) for continuous periods amounting in the aggregate to more than 11 hours in any period of 24 hours commencing two hours after midnight ; or (iii) for such periods that the driver is not allowed an interval of at least 10 hours for rest in every consecutive 24 hours : Provided that it shall be a sufficient compliance with the provisions of paragraph (iii) to allow at least nine hours for rest in a period of 24 hours if the driver be allowed an interval of 12 hours for rest in the next following 24 hours.

(2) For the purpose of this section— (a) any two or more periods of time shall be deemed to he a continuous period unless separated by an interval of not less than half an hour in which the driver is able to obtain rest and refreshment ; and • 4(b) any periods spent by the driver on other' work in connection with a vehicle or the load carried thereby,

including, in the ease of a public-service vehicle, any time spent on the vehicle in any other capacity than as a passenger shall be reckoned as time spent in driving.

(3) The Minister may, on the application of a joint industrial council, conciliation board, or other similar body, or on a joint application, by such organizations, representative of employers and workpeople in the industry, as the Minister of Labour may certify to be proper bodies to make such an application, and after referring the matter to the Industrial Court for advice. by order vary the periods of time prescribed in this section, provided he be of opinion that such variation is not likely to be detrimental to the public safety.

(4) If any person acts in contravention of this section be shall be guilty of an offence:

Provided that a person shall not be liable to be convicted

!Rider this section if he proves to the court that the contravention was due to unavoidable delay in the completion of any journey arising out of unforeseen circumstances, The new clause, as above set out, was agreed to.

THE. provisions relating to the appointment of Traffic Commissioners were altered so as to require a declaration from the person proposed to be appointed as a coraanissioner, whether he had any financial interests in any transport undertaking which carried passengers within the area. Earl Russell proposed to substitute a new clause for Clause 63, containing a new proviso to prevent conflict of jurisdiction as between the Commissioners and other authorities already having powers to fix minimum fares.

Lord Cranbrook moved an amendment to delete from the new clause a proviso that, notwithstanding any restrictions to the contrary, whether contained in this or any other Act, or otherwise having the force of law, the Commissioners should have the power to grant a road-service licence in respect of any route to any person applying for such a licence.

After further discussion, Lord Cranbrook's amendment was carried by 36 votes• to 10 votes, and Earl Russell's new clause 63 thus amended was agreed to.

F TIE new schedule for maximum-speed limits which had 1. been under consideration since the committee stage of the Bill was presented by Earl Russell and agreed to. The new schedule is in the following terms:—

Passenger vehicles, that is to say, vehicles constructed solely for the carriage of passengers and their effects:— (1) If all the wheels e'be equipped with pneumatic tyres and

Goods vehicles, that is to say, vehicles constructed or adapted for use for the conveyance of goods, or burden

of any description :—(1) When not drawing a trailer—

pneumatic tyres but have soft or elastic tyres, 16 m.p.h.

Locomotives and motor tractors :---(1) Heavy locomotives --(a) within any city, town or village, 3 m.p.h. ; (b) elsewhere, 5 m.p.h. (2) Light locomotives—(a) when not drawing a trailer, or not drawing more than two trailers, if all the wheels, both of the locomotive and of any trailer drawn by it, be provided with soft or elastic tyres, 8 m.p.h.;

Earl Russell said that he proposed to postpone the third reading of the Bill for a week, in order to provide time for

e amendments. The report stage was then con. eluded.