Trailers by Rail to 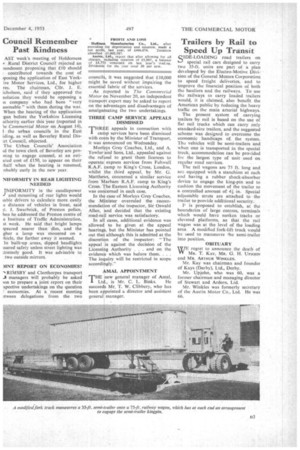 Page 43, 4th December 1953 — Trailers by Rail to
Close
Noticed an error?
If you've noticed an error in this article please click here to report it so we can fix it.

Speed Up Transtt Q1DE-LOADING road trailers on kJ special rail cars designed to carry two 35-ft. units are part of a plan developed by the Electro-Motive Division of the General Motors Corporation to speed freight deliveries, and to improve the financial position of both the hauliers and the railways. To use the railways to carry loaded trailers would, it is claimed, also benefit the American public by reducing the heavy traffic on the main arterial highways.

The present system of carrying trailers by rail is based on the use of flat rail trucks which can carry only standard-size trailers, and the suggested scheme was designed to overcome the economic handicaps of the system. The vehicles will be semi-trailers and when one is transported in the special truck, accommodation can be provided for the largest type of unit used on regular road services.

The rail wagons are 75 ft. long and are equipped with a stanchion at each end having a rubber shock-absorber device to engage the king-pin and to cushion the movement of the trailer to a controlled amount of 41 in. Special adjustable struts are attached to the trailer to provide additional security.

is proposed to establish, at the boundaries of large centres, terminals which would have sunken tracks or elevated platforms, so that the rail wagon was at the level of the loading area A modified fork-lift truck would be used to manoeuvre the semi-trailer into position.