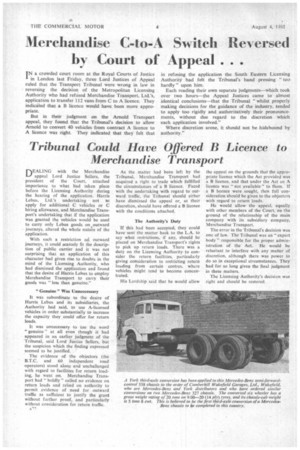 Page 24, 4th August 1961 — Merchandise C-to-A Switch Reversed by Court of Appeal . . .
Close
Noticed an error?
If you've noticed an error in this article please click here to report it so we can fix it.

I N a crowded court room at the Royal Courts of Justice in London last Friday, three Lord Justices of Appeal ruled that the Transport Tribunal were wrong in law in reversing the decision of the Metropolitan Licensing Authority who had refused Merchandise Transport, Ltd.'s, application to transfer 112 vans from C to A licence. They indicated that a B licence would have been more appropriate.

But in their judgment on the Arnold Transport appeal, they found that the Tribunal's decision to allow Arnold to convert 40 vehicles from contract A licence to A licence was right. They indicated that they felt that in refusing the application the South Eastern Licensing Authority had felt the Tribunal's hand pressing "too hardly" upon him.

Each reading their own separate judgments—which took over two hours—the Appeal Justices came to almost identical conclusions—that the Tribunal "whilst properly making decisions for the guidance of the industry, tended to apply too rigidly and authoritatively their pronouncements, without due regard to the discretion which each application involved."

Where discretion arose, it should not he hidebound by authority."