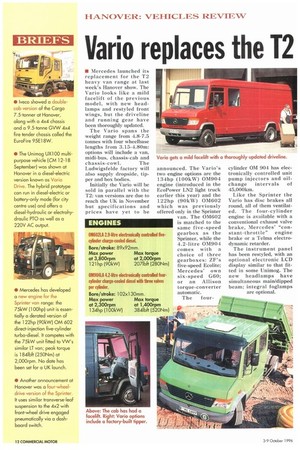 Page 14, 3rd October 1996 — Vario replaces the 12
Close
Noticed an error?
If you've noticed an error in this article please click here to report it so we can fix it.

• Mercedes launched its replacement for the T2 heavy van range at last week's Hanover show. The Vario looks like a mild facelift of the previous model, with new headlamps and restyled front wings, but the driveline and running gear have been thoroughly updated.

The Vario spans the weight range from 4.8-7.5 tonnes with four wheelbase lengths from 3.15-4.80m: options will include a van, midi-bus, chassis-cab and chassis-cowl. The Ludwigsfelde factory will also supply dropside, tipper and box bodies.

Initially the Vario will be sold in parallel with the T2: van versions are due to reach the UK in November but specifications and prices have vet to be announced. The Vario's two engine options are the 134hp (100kW) 0M904 engine (introduced in the EcoPower LN2 light truck earlier this year) and the 122hp (90kW) 0M602 which was previously offered only in the Sprinter van. The 0M602 is matched to the same five-speed gearbox as the Sprinter, while the 4.2-litre 0M904 comes with a choice of three gearboxes: ZF's five-speed Ecolite; Mercedes' own six-speed G60; or an Allison torque-converter automatic.

Like the Sprinter the Vario has disc brakes all round, all of them ventilated. The four-cylinder engine is available with a conventional exhaust valve brake, Mercedes' "constant-throttle" engine brake or a Telma electrodynamic retarder.

The instrument panel has been restyled, with an optional electronic LCD display similar to that fitted in some Unimog. The new headlamps have simultaneous main/dipped beam; integral foglamps are optional.