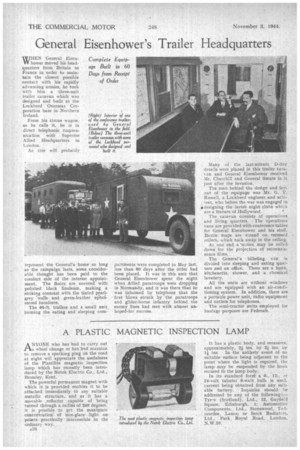 Page 30, 3rd November 1944 — General Eisenhower's Trailer Headquarters
Close
Noticed an error?
If you've noticed an error in this article please click here to report it so we can fix it.
Keywords : Trailer, Dwight D. Eisenhower

WHEN General EisenW hower moved his headquarters from Britain to France in order to maintain the closest possible contact with his rapidly advancing armies, he took with him a three-unit trailer caravan which was designed and built at the Lockheed Overseas Corporation base in Northern Ireland.

From his Circus wagon, as he calls it, he is in direct telephonic coinmunication with Supreme Allied Headquarters in London.

As this will probably represent the General's home so long as the campaign lasts, some considerable thought has been paid to the comfort side of the interior appointment. The floors are covered with polished black linoleum, making a striking contrast with the tinted pearl. grey walls and green-leather upholstered furniture.

The 60-ft. trailers and a small unit. forming the eating and sleeping corn

partments were completed in May last, less than 60 days after the order had been placed. It was in this unit that General Eisenhower spent the night when Allied paratroops were dropping in Normandy, and it was there that he was informed by telephone that the first blows struck by 'the paratroops and glider-borne infantry behind the enemy lines had met with almost unhoped-for success. Many of the last-minute D-day details were planed in this trailer caravan and General Eisenhower received Mr. Churchill and General Smuts in it just after the invasion.

The man behind the design and layout of the equipage was Mr. G. V. Russel!, a Lockheed engineer and achitest, who before the war was engaged in *designing the lavish night clubs which are a feature of Hollywood. • The caravan consists of operations and living quarters. The operations vans are provided with conference tables for General Eisenhower and his stall. Battle maps are wound on recessed rollers, which tuck away in the ceiling. At one end a 'screen may be rolled down for the projection of reconnaissance films, The General's billeting van is divided into sleeping and eating quarters and an office. There are a bunk, kitchenette, shower, and a chemical lavatory.

All the units are without windows and are equipped with an air-condltinning system. In addition, there are a portable power unit, radio equipment and outlets for telephones.

The semi-tractor units employed for haulage purposes are Federals.