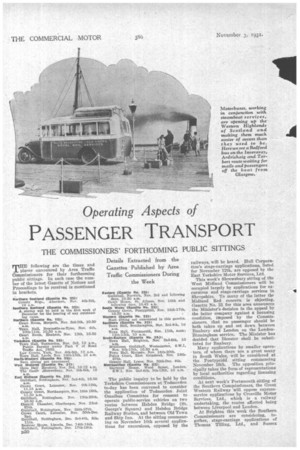 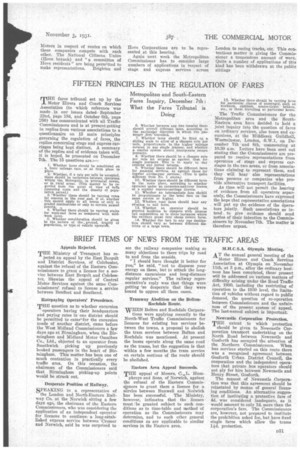 Page 116, 3rd November 1931 — Operating Aspects of
Close
Noticed an error?
If you've noticed an error in this article please click here to report it so we can fix it.

THE COMMISSIONERS' FORTHCOMING PUBLIC SITTINGS MILE following are the times and 1 places announced by Area Traffic Commissioners for their forthcoming public sittings. In each case the number of the latest Gazette of Notices and Proceedings to be received is mentioned in brackets.

This week's Shrewsbury sitting of the West Midland Commissioners will be occupied largely by applications for excursions and stage-carriage services in Shropshire. To many of the latter the Midland Red concern is objecting. Gazette No. 31 for this area announces the Minister's decision in the appeal by the latter company against a licensing condition, imposed by the Commissioners, that no passenger should be both taken up and set down between Banbury and London on the LondonBirmingham service. The Minister has decided that Bicester shall be substituted for Banbury. Many applications by smaller operators, of whom there are a great many in South Wales, will be considered at the Pontypridd sitting commencing November 16th. The opposition principally takes the form of representations by local authorities regarding licensing conditions.

At next week's Portsmouth sitting of the Southern Commissioners, the Great Western Railway will oppose expressservice applications by Crosville Motor Services, Ltd., which is a railway , undertaking, the routes affected being between Liverpool and London.

At Brighton this week the Southern Commissioners are considering, together, stage-carriage applications of Thomas Tilling, Ltd., and Sussex Motors in respect of routes on which these companies compete with each other. The National Citizens Union (Hove branch) and "a committee of Hove residents" are being permitted to make representations. Brighton and Hove Corporations are to be represented at this hearing.

Again next week the Metropolitan Commissioner has to consider large numbers of applications in respect of stage and express services across London to racing tracks, etc. This contentious matter is giving the Commissioner a tremendous amount of work. Quite a number of applications of this kind has been withdrawn at the public sittings