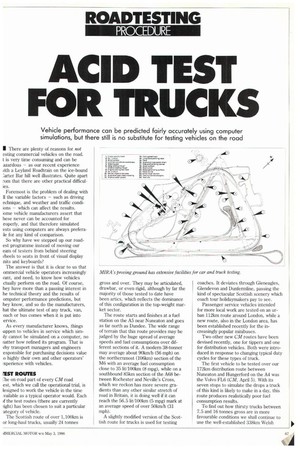 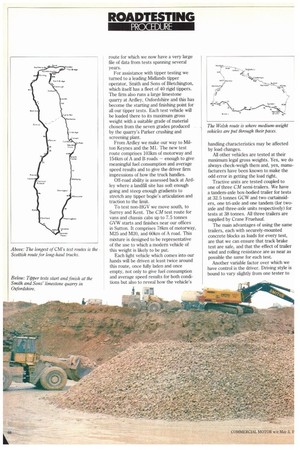 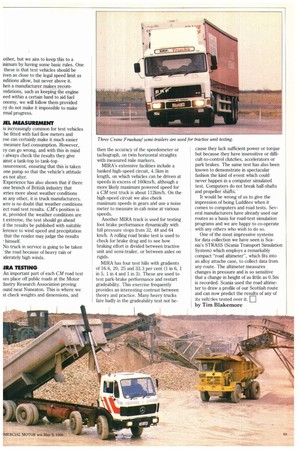 Vehicle performance can be predicted fairly accurately using computer simulations, but there still is no substitute for testing vehicles on the road 1 There are plenty of reasons for not esting commercial vehicles on the road. t is very time consuming and can be azardous — as our recent experience 6rith a Leyland Roadtrain on the ice-bound :arter Bar hill well illustrates. Quite apart ruin that there are other practical difficulles.

Foremost is the problem of dealing with 11 the variable factors — such as driving echnique, and weather and traffic condiions — which can affect the results. irirne vehicle manufacturers assert that hese never can be accounted for roperly, and that therefore simulated ests using computers are always preferade for any kind of comparison.

So why have we stepped up our roadest programme instead of moving our earn of testers from behind steering 'heels to seats in front of visual display nits and keyboards?

The answer is that it is clear to us that ommercial vehicle operators increasingly want, and need, to know how vehicles ctually perform on the road. Of course, hey have more than a passing interest in he technical theory and the results of omputer performance predictions, but hey know, and so do the manufacturers, hat the ultimate test of any truck, van, oach or bus comes when it is put into enrice.

As every manufacturer knows, things appen to vehicles in service which simdy cannot be simulated on a computer, no natter how refined its program. That is vhy transport managers and engineers esponsible for purchasing decisions value o highly their own and other operators' 6xperience with vehicles.

rEST ROUTES [le on-road part of every CM road est, which we call the operational trial, is lesigned to work the vehicle in the time Lvailable as a typical operator would, Each if the test routes (there are currently !ight) has been chosen to suit a particular :ategory of vehicle.

The Scottish route of over 1,1001cm is or long-haul trucks, usually 24 tonnes gross and over. They may be articulated, drawbar, or even rigid, although by far the majority of those tested to date have been artics, which reflects the dominance of this configuration in the top-weight market sector.

The route starts and finishes at a fuel station on the AS near Nuneaton and goes as far north as Dundee, The wide range of terrain that this route provides may be judged by the huge spread of average speeds and fuel consumptions over different sections of it. A modern 38-tonner may average about 90km/h (56 mph) on the northernmost (106km) section of the M6 with an average fuel consumption close to 35 lit/100km (8 mpg), while on a southbound 85km section of the A68 between Rochester and Neville's Cross, which we reckon has more severe gradients than any other similar stretch of road in Britain, it is doing well if it can reach the 56.5 lit/100km (5 mpg) mark at an average speed of over 50km/h (31 mph).

A slightly modified version of the Scottish route for trucks is used for testing coaches. It deviates through Gleneagles, Glendevon and Dunfermline, passing the kind of spectacular Scottish scenery which coach tour holidaymakers pay to see.

Passenger service vehicles intended for more local work are tested on an urban 112km route around London, while a new route, also in the London area, has been established recently for the increasingly popular minibuses.

Two other new CM routes have been devised recently, one for tippers and one for distribution vehicles. Both were introduced in response to changing typical duty cycles for these types of truck.

The first vehicle to be tested over our 172km distribution route between Nuneaton and Hungerford on the A4 was the Volvo FI-6 (CM, April 5). With its seven stops to simulate the drops a truck of this kind is likely to make in a day, this route produces realistically poor fuel consumption results.

To find out how thirsty trucks between 7.5 and 16 tonnes gross are in more favourable conditions we shall continue to use the well-established 338krn Welsh route for which we now have a very large file of data from tests spanning several years.

For assistance with tipper testing we turned to a leading Midlands tipper operator, Smith and Sons of Bletchington, which itself has a fleet of 40 rigid tippers. The firm also runs a large limestone quarry at Ardley, Oxfordshire and this has become the starting and finishing point for all our tipper tests. Each test vehicle will be loaded there to its maximum gross weight with a suitable grade of material chosen from the seven grades produced by the quarry's Parker crushing and screening plant.

From Ardley we make our way to Milton Keynes and the Ml. The new test route comprises 1031m of motorway and 154km of A and B roads — enough to give meaningful fuel consumption and average speed results and to give the driver firm impressions of how the truck handles.

Off-road ability is assessed back at Ardley where a landfill site has soft enough going and steep enough gradients to stretch any tipper bogie's articulation and traction to the limit.

To test non-HGV we move south, to Surrey and Kent. The CM test route for vans and chassis cabs up to 7.5 tonnes GVW starts and finishes near our offices in Sutton. It comprises 781m of motorway. M25 and M20, and 60km of A road. This mixture is designed to be representative of the use to which a modern vehicle of this weight is likely to be put.

Each light vehicle which comes into our hands will be driven at least twice around this route, once fully laden and once empty, not only to give fuel consumption and average speed results for both conditions but also to reveal how the vehicle's handling characteristics may be affected by load changes.

All other vehicles are tested at their maximum legal gross weights. Yes, we do always check-weigh them and, yes, manufacturers have been known to make the odd error in getting the load right..

Tractive units are tested coupled to one of three CM semi-trailers. We have a tandem-axle box-bodied trailer for tests at 32.5 tonnes GCW and two curtainsiders, one tri-axle and one tandem (for twoaxle and three-axle units respectively) for tests at 38 tonnes. All three trailers are supplied by Crane Fruehauf.

The main advantages of using the same trailers, each with securely-mounted concrete blocks as loads for every test, are that we can ensure that track brake test are safe, and that the effect of trailer wind and rolling resistance are as near as possible the same for each test.

Another variable factor over which we have control is the driver. Driving style is bound to vary slightly from one tester to other, but we aim to keep this to a inimum by having some basic rules. One these is that test vehicles should be iven as close to the legal speed limit as .nditions allow, but never above it. hen a manufacturer makes recomendations, such as keeping the engine eed within a certain band to aid fuel onomy, we will follow them provided e.y do not make it impossible to make rmal progress.

JEL MEASUREMENT is increasingly common for test vehicles be fitted with fuel flow meters and ese can certainly make it much easier measure fuel consumption. However, ey can go wrong, and with this in mind a always check the results they give ainst a tank-top to tank-top easurement, ensuring that this is taken one pump so that the vehicle's attitude es not alter.

No truck in service is going to be taken ' the road because of heavy rain or xlerately high winds.

An important part of each CM road test ces place off public roads at the Motor dustry Research Association proving ound near Nuneaton. This is where we St check weights and dimensions, and then the accuracy of the speedometer or tachograph, on twin horizontal straights with measured mile markers.

MIRA's extensive facilities include a banked high-speed circuit, 4.5Iuri in length, on which vehicles can be driven at speeds in excess of 160km/h, although a more likely maximum powered speed for a CM test truck is about 112km/h. On the high-speed circuit we also check maximum speeds in gears and use a noise meter to measure in-cab noise at various speeds.

Another MIRA track is used for testing foot brake performance dynamically with full pressure stops from 32, 48 and 64 km/h. A rolling road brake test is used to check for brake drag and to see how braking effort is divided between tractive unit and semi-trailer, or between axles on rigids.

MIRA has four test hills with gradients of 16.6, 20, 25 and 33.3 per cent (1 in 6, 1 in 5, 1 in 4 and 1 in 3). These are used to test park-brake performance and restart gradeability. This exercise frequently provides an interesting contrast between theory and practice. Many heavy trucks fare badly in the gradeability test not be cause they lack sufficient power or torque but because they have insensitive or difficult-to-control clutches, accelerators or park brakes. The same test has also been known to demonstrate in spectacular fashion the kind of event which could never happen in a computer simulated test. Computers do not break half-shafts and propeller Shafts.

It would be wrong of us to give the impression of being Luddites when it comes to computers and road tests. Several manufacturers have already used our routes as a basis for road-test simulation programs and we are happy to co-operate with any others who wish to do so.

One of the most impressive systems for data collection we have seen is Scania's STRASS (Scania Transport Simulation System) which employs a remarkably compact "road altimeter", which fits into an alloy attache case, to collect data from any route. The altimeter measures changes in pressure and is so sensitive that a change in height of as little as 0.5m is recorded. Scania used the road altimeter to draw a profile of our Scottish route and can now predict the results of any of its vehicles tested over it. 0 by Tim Blakemore