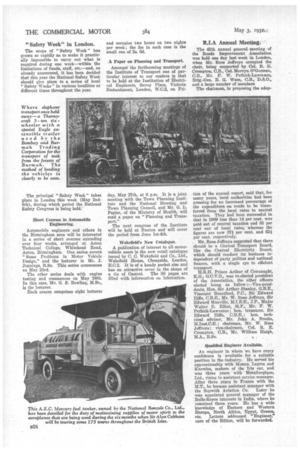 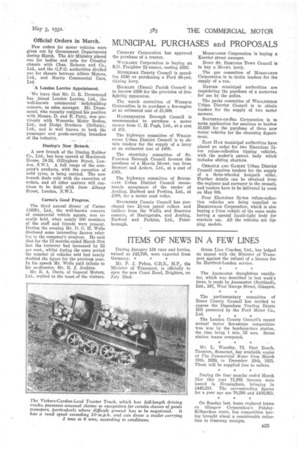 Page 86, 3rd May 1932 — "Safety Week" in London.
Close
Noticed an error?
If you've noticed an error in this article please click here to report it so we can fix it.
Keywords : London, British Honours System

The scope of "Safety Week" has grown so rapidly as to make it practically impossible to carry out what is required during one week—within the limitations of funds, staff, etc.—and, Its already announced, it has been decided that this year the National Safety Week should give place to a series of local "Safety Weeks" in various localities at different times throughout the year.

Where elephant transport once held sway— a Thorny. croft 3 ton six • wheeler with a special Eagle extensible trailer used ed by the Bombay and Bur. mah Trading Corporation for the transport of teak from the forests of Burmah. The method of loading the vehicles is dearly to be seen.

The principal "Safety Week" takes place in London this week (May 2nd8th), during which period the National Safety Congress is being held.

Automobile engineers and others in the Birmingham area will be interested in a series of short courses extending over four weeks, arranged at Aston Technical College, Whitehead Road, Aston, Birmingham. One series-covers " Some Problems in Motor Vehicle Design," and the lecturer is Mr. J. Jennings, B.Sc. This series commences on May 23rd.

The other series deals with engine testing and commences on May 24th. In this case, Mr. G. S. Bowling, M.Sc., is the lecturer.

Each course comprises eight lectures and occupies two hours on two nights per week; the fee in each case is the small one of 2s. 6d.

A Paper on Planning and Transport.

Amongst the forthcoming meetings of the Institute of Transport one of particular interest to our readers is that to be held at the Institution of Electrical Engineers, Savoy Place, Victoria Embankment, London, W.C.2, on Fri

day, May 27th, at 6 p.m. It is a joint meeting with the Town Planning Institute and the National Housing and Town Planning Council, and Mr. G. L. Pepler, of the Ministry of Health, will read a paper on "Planning and Transport."

The next congress of the Institute will be held at Buxton and will cover the period from June lst-4th.

A publication of interest to all motorvehicle users is the new retail catalogue issued by C. C. Wakefield and Co., Ltd., Wakefield House, Cheapside, London, E.C.2. It is of a handy pocket size and has an attractive cover in the shape of a tin of Castrol. The 50 pages are filled with information on lubrication.

The 45th annual general meeting of the Roads Improvement Association was held one day last week in London, when Mr. Rees Jeffreys occupied the chair, being supported by Ool. IL E. Crompton, C.B., Col. Mervyn O'Gorman, C.B., Mr. F. W. Pethick-Lawruice, Brig.-Gen. E. G. Wace, C.B., D.S.O., and a large number of members The chairman, in proposing the adop tion of the annual report, said that, for many years, local authorities had been pressing for an increased percentage of the expenditure on roads to be transferred from the local rates to central taxation. They had been successful in that in 1909 less than 14 per cent, was paid out of central taxation and 85 per cent out of local rates, whereas the figures are now 37i per cent. and 62 per cent. respectively.

Mr. Rees Jeffreys suggested that there should be a Central Transport Board, like the Central Electricity Board, which should conduct its business independent of party politics and national finance, with a single eye to efficient transport.

An engineer in whom we have every confidence is available for a suitable position in the industry. He served his apprenticeship with Messrs. Legros and Knowles, makers of the Iris car, and was three years with Metallurgique, Ltd., rising to assistant service manager. After three years in France with the M.T., he became assistant manager with the Sopwith Aviation Co. Later he was appointed general manager of the Rolls-Royce interests in India, where he remained three years. He has a wide knowledge of Eastern and Western Europe, North Africa, Egypt, Greece, etc. Letters addressed "Engineer," care of the Editor, will be forwarded.

Few orders for motor vehicles were given out by Government Departments during March. The Air Ministry placed one for bodies and cabs for Crossley chassis with Chas. Roberts and Co., Ltd., and the G.P.O. authorities divided one for chassis between Albion Motors, Ltd., and Morris Commercial Cars, Ltd.

We learn that Mr. D. R. Drummond has joined London Lorries, Ltd., the well-known commercial bodybuilding concern, as sales manager. Mr. Drummond, who recently resigned his position with Messrs. D. and E. Petty, was previously with Wycombe Motor Bodies, Ltd., and Dodge Brothers (Brftain), Ltd., and is well known in both the passenger and goods-carrying branches of the industry.

A new branch of the Dunlop Rubber Co., Ltd., has been opened at Macintosh House, 24-28, Gillingham Street, London, S.W.1. A full range of the company's products, with the exception of solid tyres, is being carried. The new branch deals only with the execution of orders, and all other matters will continue to be dealt with from Albany Street, London, N.W.1.

The third annual dinner of Carmo (1929), Ltd., the well-known concern of commercial vehicle agents, was recently held, when nearly 100 members of the staff and friends were present. During the evening Mr. D. C. H. Wells disclosed some interesting figures relating to the company's progress. He said that for the 12 months ended March 31st last the turnover had increased by 52 per cent, whilst during the same period the number of vehicles sold had nearly doubled the figure for the previous year. In his speech Mr. Wells paid tribute to his co-director, Mr. E. J. Jenkins.

Mr. It. A. Davis, of General Motors, Ltd., replied to the toast of the visitors.