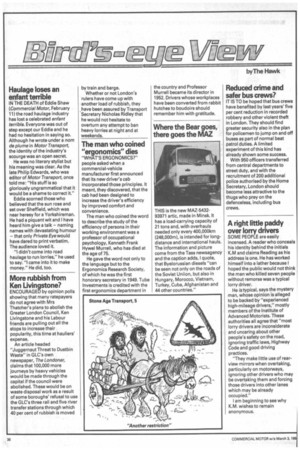 ENCOURAGED by opinion polls showing that many ratepayers do not agree with Mrs Thatcher's plans to abolish the Greater London Council, Ken Livingstone and his Labour friends are pulling out all the stops to increase their popularity, this time at hauliers' expense.

An article headed "Juggernaut Threat to Dustbin Waste" in GLC's own newspaper, The Londoner, claims that 100,000 more journeys by heavy vehicles would be made through the capital if the council were abolished. These would bean waste disposal work as a result of some boroughs' refusal to use the GLC's three rail and five river transfer stations through which 40 per cent of rubbish is moved by train and barge.

Whether or not London's rulers have come up with another load of rubbish, they have been assured by Transport Secretary Nicholas Ridley that he would not hesitate to overturn any attempt to ban heavy lorries at night and at weekends.