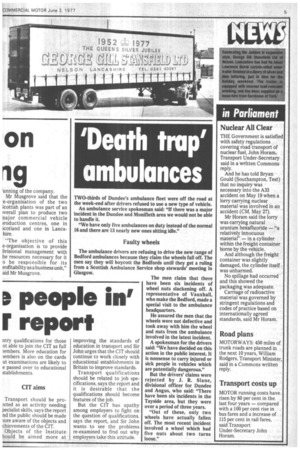 And he has told Bryan Gould (Southampton, Test) that no inquiry was necessary into the A33 accident on May 19 when a lorry carrying nuclear material was involved in an accident (CM, May 27).

Mr Horam said the lorry was carrying natural uranium hexafluoride — "a relatively innocuous material" — in a cylinder within the freight container borne by the vehicle.

And although the freight container was slightly damaged, the cylinder itself was unharmed.

No spillage had occurred• and this showed the packaging was adequate.

Carriage of radioactive material was governed by stringent regulations and codes of practice based on internationally agreed standards, said Mr Horam.

MOTORWAYS: 450 miles of trunk roads are planned in the next 10 years, William Rodgers, Transport Minister, said in a Commons written reply.

MOTOR running costs have risen by 80 per cent in the last four years — compared with a 100 per cent rise in bus fares and a increase of 115 per cent in rail fares, said Transport Under-Secretary John Horam.