Rail to Cut Livestock Stations to under 50 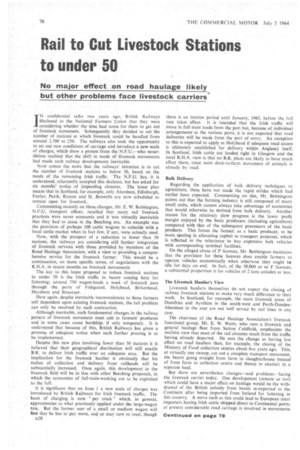 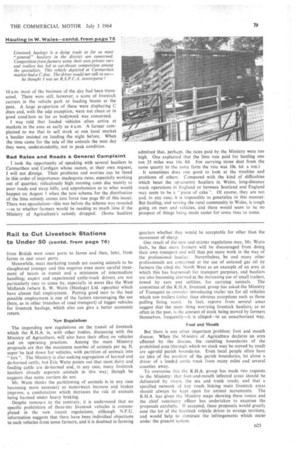 Page 78, 3rd July 1964 — Rail to Cut Livestock Stations to under 50
Close
Noticed an error?
If you've noticed an error in this article please click here to report it so we can fix it.
Keywords : Agriculture In The United Kingdom, National Farmers Union, Rail Transport, Livestock, United Kingdom, Business / Finance

INconfidential talks two years ago, British Railways disclosed to the National Farmers Union that they were considering whether the time had come for them to get out of livestock movement. Subsequently they decided to cut the number of stations at which livestock could be handled from around 2,700 to 250. The railways also took the opportunity to set out new conditions of carriage and introduce a new scale of charges, which drew a protest from the N.F.U.—who nevertheless realized that the shift in rhode of livestock movements had made such railway developments inevitable.

Now comes the news that the railways' intention is to cut the number of livestock stations to below 50, based on the needs of the remaining Irish traffic. The N.F.U. has, it is understood, reluctantly accepted this decision, but has asked for six months' notice of impending closures, The latest plan means that in Scotland, for example, only Aberdeen, Edinburgh, Forfar, Perth, Reston and St. Boswells are now scheduled to remain open for livestock.

Commenting recently on these changes, Mr. E. W. Bebbington, N.F.U.. transport officer, recalled that many rail livestock practices were never economic and it Was virtually inevitable that they had to cease in the Beeching era. An example was the provision of perhaps 100 cattle wagons to coincide with a local cattle market when in fact few, if any, were actually used.

Now, with the prospect of a reduction to fewer than 50 stations, the railways are considering still further integration of livestock services with those provided by members of the Road Haulage Association, with a view to providing a comprehensive service for the livestock farmer. This would be a continuation, on more specific terms, of negotiations with the R.H.A. in recent months on livestock movements.

The key to this latest proposal to reduce livestock stations to under 50 is the Irish traffic in beasts coming here for fattening; around 750 wagon-loads a week of livestock pass through the ports of Fishguard, Holyhead, Birkenhead, Heysham and Stranraer.

Here again, despite inevitable inconveniences to those farmers still dependent upon existing livestock stations, the rail problem can only be resolved by such contraction.

Although inevitable, such fundamental changes in the railway pattern of livestock movement must add to farmers' problems and in some cases cause hardship, if only temporary. It is understood that because of this British Railways has given a promise of adequate notice when such further pruning is to be implemented.

Despite this new plan involving fewer than 50 stations it is believed that their geographical distribution will still enable RR. to deliver Irish traffic over an adequate area. But the implication for the livestock haulier is obviously that his radius of collection and delivery from railheads will be substantially increased. Once again, this development in the livestock field will be in line with other Beeching proposals, in which the economics of full-train-working are to be exploited to the full.

It is significant that on June 1 a new scale of charges was introduced by British Railways for Irish livestock traffic. The basis of charging is now "per truck" which, in general, approximates to what previously applied under the large-wagon rate, But the former user of a small or medium wagon will find that he has to pay more, and so may turn to road, though o20

there is an interim period until January, 1965, before the full rate takes effect. It is intended that the Irish traffic will move in full train loads from the pon but, because of individual arrangements at the various ports, it is not expected that road deliveries will be made from the port of entry. An exception to this is expected to apply at Holyhead if adequate road access is ultimately established for delivery within Anglesey itself. In Scotland, Irish cattle are landed right in Glasgow andthe local R.H.A. view is that no B.R. plans are likely to have much effect there, since most dcick-to-farm movement of animals is already by road.

Bulk Delivery Regarding the application of bulk delivery techniques to agriculture, these have not made the rapid strides which had earlier been expected. Commenting orf this, Mr. Bebbington points out that the farming industry is still composed of many small units, which cannot always take advantage of economies that would otherwise be derived from bulk delivery. Another reason for the relatively slow progress is the lower profit margin enjoyed by the basic producers (including agriculture) compared with that of the subsequent processors of the basic products. This forces the farmer, as a basic producer, to be more sparing in allocating capital to transport purposes, which is reflected in the reluctance to buy expensive bulk vehicles with corresponding terminal facilities.

On the alleged abuse of F licences, Mr. Bebbington maintains that the provision for these licences does enable farmers to operate vehicles economically when otherwise they might be idle for days on end. In fact, of the 58,000 or so F licences, a substantial proportion is for vehicles of 2 tons unladen or less, The Livestock Haulier's View Livestock hauliers themselves do not expect the closing of railway livestock stations to make very much difference to their work. In Scotland, for example, the main livestock areas of Dumfries and Ayrshire in the south-west and Perth-DundeeAberdeen in the east are not well served by rail lines in any case.

The chairman of the Road Haulage Association's livestock functional group, Mr. E. W. Watts, who runs a livestock and general haulage fleet from Sutton Coldfield, emphasizes the realistic view that most of the rail closures result from the traffic having already departed. He sees the change as having less effect on road hauliers than, for example, the closing of the Ministry of Food collection centres about five years ago. This, at virtually one swoop, cut out a complete transport movement, the beasts going straight from farm to slaughterhouse instead of from farm to collection centre and thence to abattoir in a separate haul.

But there are nevertheless changes—and problems—facing the livestock carrier today. One development (remote or not) which could have a major effect on haulage would be the withdrawal of the British subsidy from beasts re-exported to the Continent after being imported from Ireland for fattening in this country. A move such as this could lead to European meat importers having Irish cattle shipped direct to Continental ports; at present considerable road carriage is involved in movements

10 a.m. most of the business of the day had been transacted. There were still, however, a score of livestock carriers in the vehicle park or loading beasts at the pens. A large proportion of these were displaying C discs and, with the odd exception, were not clean or in good cond:tion so far as bodywork was concerned.

I was told that loaded vehicles often arrive at markets in the area as early as 4 a.m. A farmer complained to me that to sell stock at one local market a haulier insisted on loading the night before. When the time came for the sale of the animals the next day they were, understandably, not in peak condition.

Bad Rates and Roads a General Complaint I took the opportunity of speaking with several hauliers in Carmarthen and Cardigan whose names, at their own request, I will not divulge. Their problems and worries can be listed in this order of importance: inadequate rates, especially working out of quarries; ridiculously high running costs due mainly to poor roads and steep hills; and apprehension as to what would happen on August 1 when the new scheme for the distribution of the lime subsidy comes into force (see page 80 of this issue). There was speculation—this was before the scheme was revealed —as to whether farmers would be needing as much lime if the Ministry of Agriculture's subsidy dropped. (Some hauliers admitted that, perhaps, the rates paid by the Ministry were too high. One explained that the lime rate paid for hauling one ton 25 miles was 16s. 8d. For carrying stone dust from the same quarry to the same farm the rate was 10s. 6d. a ton.) It sometimes does one good to look at the troubles and problems of others. Compared with the kind of difficulties which beset the up-country hauliers in Wales, long-distance trunk operations in England or between Scotland and England may seem to be a "piece of cake ". Of course, they are not and, in any case, it is impossible to generalize in this manner. But hauling, and serving the rural community in Wales, is tough going on men and vehicles, and there would seem to be no prospect of things being made easier for some time to come.