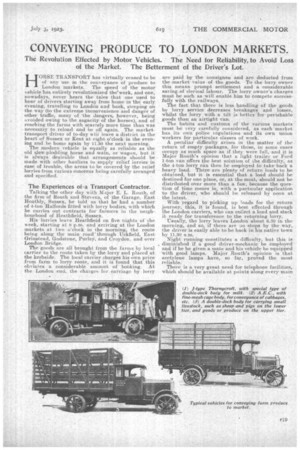 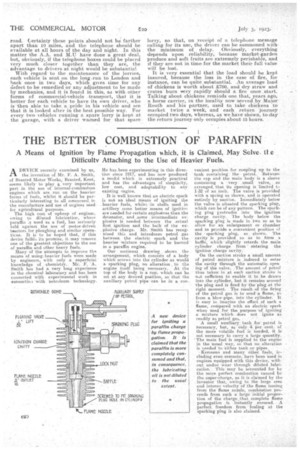 The Revolution Effected by Motor Vehicles. The Need for Reliability, to Avoid Loss of the Market. The Betterment of the Driver's Lot.

HORSE TRANSPORT has virtually ceased to be of any use in the conveyance of produce to . London markets. The speed of the motor vehicle has entirely revolutionized thework, and one, nowadays, never hears the tales that one used to hear of drivers starting away from home -in the early evening, travelling to London and back, sleeping on the way (to the extreme inconvenience and danger of other traffic, many of the dangers however, being avoided owing to the sagacity of the horses) and of reaching the farms with • scarcely more time than was necessary to reload and be off again. The markettransport driver of to-day will leave a district in the heart of Sussex or Kent at eight o'clock-in the evening and be home again by 11.30 the next morning. The modern vehicle is equally as reliable as the old &low-plodding horse and wain, or wagon, but it is always desirable that arrangements should be made with other hauliers to supply relief lorries in case of trouble, the areas to be covered by the relief lorries from various concerns being carefully arranged and specified.

Talking the other day with Major E. L. Routh, of the firm of Routh and Stevens, of the Garage, East Hoathly, Sussex, he told us that he' had a number of 4-ton Halfords fitted with lorry bodies, with which he carries out. contracts for farmers in the neighbourhood of Heathfield, Sussex.

His lorries leave Heathfieid on five nights of the week, starting at 8 p.m. and arriving at the London markets at two o'clock in the morning, the route being along the main road 'through Uckfield, East Grinstead, G-odstone, Purley, and Croydon, and over London Bridge.

The goods are all brought from the farms by local carrier to the route taken by the lorry and placed at the kerbside. The local carrier charges his own price from farm to lorry route, and it is found that this obviates a considerable amount of hooking. At the London end, the charges for carriage by lorry are paid by the consignee and are deducted from the market value of the goods. To the lorry owner this means prompt settlement and a considerable saving of clerical labour. The lorry owner's charges must be such: as will enable him to compete successfully with the railways.

The fact that there is less handling of the goods by lorry service decreases breakages arid losses, whilst the lorry with a tilt is better for perishable goods than an airtight van.

The habits and customs of the various markets must be very carefully considered, as each market has, its own police regulations and its own union workers for particular. classes of work.

• A peculiar difficulty arises in the matter of the return of empty packages, for those, in some eases occupy as much space as if they were 'full,and it is _ Major Routh's opinion that alight trailer or Ford 1-ton van -offers the best solution of the difficulty, as the 4-ton lorry can then be employed to takes-back a heavy load. There are plenty of return loads to be obtained-, but it is essential that a load should be destined for one place, or, at the most, should not be distributed over more than a few, because the question of time comes in, with a particular application to the driver, who should be released by noon at the latest.

Withregard to picking up loads for the return journey, this, it is found, is best effected through the London carriers, who can collect a load 4nd stack it ready for transference to the returning lorry. Usually, the lorry leaves London about 6.30 in the morning, and so-, if there are AO stops by the way, the driver is easily able to be back in his native town by 11.30 a.m. Night running constitutes a difficulty, .but this is diminished if a good driver-mechanic be employed and if he be given a mate and his vehicle be equipped with good lamps. Major Routh's opinion is that acetylene lamps have, so far, proved the most

reliable. -There is a very great need for telephone facilities, which should be available at points along every mum

road. Certainly these points should not be farther apart than 10 miles, and the telephone should be available at all hours of the day and night. In this matter the A.A. and AI.0 have done a great deal, but, obviously, if the telephone boxes could be placed very much closer together than they are, the advantage to drivers at night would be substantial. With regard • to the maintenance of the lorries, each vehicle is sent on the long-run to London and back once in two days, which gives time for any defect to be remedied or any adjustment to be made by mechanics, and it is found in this, as with other forms of commercial-vehicle .transport, that it is better for each vehicle to have its own driver, who is 'then able to take a pride in his vehicle and see that it is looked after in the best possible way. For every two vehicles running a spare lorry is kept at the garage, with a driver warned for that spare

lorry-, so that, on receipt of a telephone message calling for its use, the driver can be summoned with the minimum of delay. Obviously, everything depends upon reliability, because market-garden produce and soft fruits are extremely perishable, and if they are not in time for the market their full value will be lost.

It is -very essential that the load should be kept insured, because the loss in the case of. fire, for instance, -can be quite. substantial. An average load of chickens is worth about £700. and dry straw and crates burn very rapidly should a fire once start. Talking about chickens reminds one that, years ago, a horse carrier, in the locality now served by.1410.or Eolith and his partner, used to take chickens to market twice a week, and each return journey occupied two days, whereas, as we have shown, to-day the return journey only occupies about 15 hours.