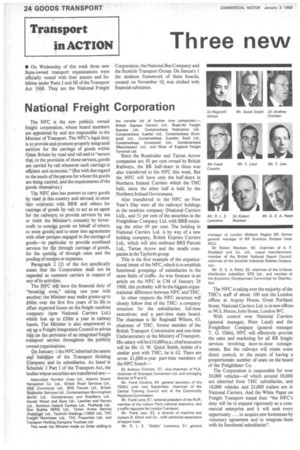 The NFC is the new publicly owned freight corporation, whose board members are appointed by and are responsible to the Minister of Transport. The NFC's legal duty is to provide and promote properly integrated services for the carriage of goods within Great Britain by road and rail and to "secure that, in the provision of those services, goods are carried by rail whenever such carriage is efficient and economic." (But with due regard to the needs of the person for whom the goods are being carried, and the requirements of the goods themselves.) The NFC also has powers to carry goods by road in this country and abroad; to enter into contracts with BRB and others for carriage of goods by rail; to act as an agent for the railways; to provide services by sea or (with the Minister's consent) by hovercraft; to consign goods on behalf of others; to store goods; and to enter into agreements with other persons engaged in the carriage of goods—in particular to provide combined services for the through carriage of goods, for the quoting of through rates and the pooling of receipts or expenses.

Paragraph 2 (2) of the Act specifically states that the Corporation shall not be regarded as common carriers in respect of any of its activities.

The NFC will have the financial duty of "breaking even," taking one year with another; the Minister may make grants up to £60m over the first five years of its life to offset expected losses on the freight sundries company (now National Carriers Ltd.) which lost up to £20m a year in railway hands. The Minister is also empowered to set up a Freight Integration Council to advise him on the prdvision of an integrated freight transport service throughout the publicly owned organizations.

Since the Roadrailer and Tartan Arrow companies are 50 per cent owned by British Railways, the BR half-share in these was also transferred to the NFC this week. But the NFC will have only the half-share in Northern Ireland Carriers which the THC held, since the other half is held by the Northern Ireland Government.

Also transferred to the NFC on New Year's Day were all the railways' holdings in the sundries company (National Carriers Ltd)., and 51 per cent of the securities in the Freightliner Company Ltd. with BRB retaining the other 49 per cent. The holding in National Carriers Ltd. is by way of a new holding company, British Express Carriers Ltd., which will also embrace BRS Parcels Ltd., Tartan Arrow and the smalls companies in the Tayforth group.

This is the first example of the organizational intent of the NFC, which is to establish functional groupings of subsidiaries in the same fields of traffic. As was forecast in an article on the NFC in CM of January 26 1968, this probably will be the biggest organizational difference between NFC and THC.

In other respects the NFC structure will closely follow that of the THC: a company structure for the subsidiaries; full-time executives; and a part-time main board. The chairman is Sir Reginald Wilson, 63, chairman of THC, former member of the British Transport Commission and one-time Undersecretary at the Ministry of Transport. His salary will be £16,000 p.a.; chief executive will be Mr. G. W. Quick Smith, holder of a similar post with THC; he is 62. There are seven £1,000-a-year part-time members of the NFC board:— Sir Andrew Crichton, 57, vice-chairman of PLA, chairman of Overseas Containers Ltd. and managing director of P and 0.

Mr. Frank Cousins. 64. general secretary of the TGWU until next September, chairman of the Central Training Council and of the Community Relations Commission.

Mr. Frank Lane, 61, national president of the NUR. member of the Labour Party national executive, and a traffic regulator for London Transport.

Mr. Frank Law, 52, a director of machine tool makers B. Elliott and Co., with particular experience of export trade.

Mr. D. E. A. Pettit, 53. chairman of the Unilever distribution subsidiary SPD Ltd.. and member of the Economic Development Committee for Distribution.

The NFC is taking over the majority of the THC's staff of about 100 and the London offices at Argosy House, Great Portland Street. National Carriers Ltd. is in new offices at NCL House, John Street, London WC.

With control over National Carriers (general manager, Peter Land) and the Freightliner Company (general manager T. G. Gibb), NFC will effectively provide the sales and marketing for all BR freight services involving door-to-door consignments. But the railways will retain some direct control, to the extent of having a proportionate number of seats on the board of the Freightliner Co.

The Corporation is responsible for over 30,000 vehicles—of which around 18,000 are inherited from THC subsidiaries, and 10,000 vehicles and 25,000 trailers are in National Carriers. And the White Paper on Freight Transport stated that: "the NFC's duty will be to expand vigorously as a commercial enterprise and it will seek every opportunity . . to acquire new businesses by voluntary agreement and to integrate them with its functional subsidiaries".