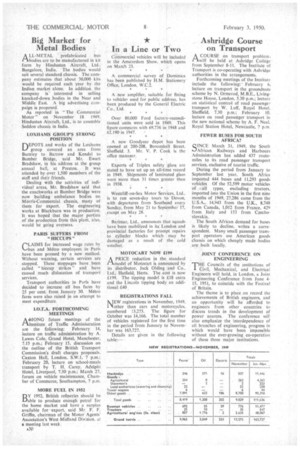 Page 32, 3rd February 1950 — LOXII.AMS GROUP'S STRONG POSITION
Close
Noticed an error?
If you've noticed an error in this article please click here to report it so we can fix it.
Keywords : Lancashire, Bamber, Geography Of England, Burnley, Counties Of England, English Footballers, Environment

DEPOTS and works of the Loxharns group covered an area from Burnley to Barrow and Kendal to Bamber Bridge, said Mr. Ewart Bradshaw, in his address at the group annual ball, at Preston. It was attended by over 1.500 members of the staff and their friends.

Dealing with the activities of individual areas, Mr. Bradshaw said that the coachworks at Bamber Bridge were now building ambulance bodies on Morris-Commercial chassis, many of them for export. The engineering works at Blackburn was in production. It was hoped that the major portion of the production from this plant, also, would be going overseas.