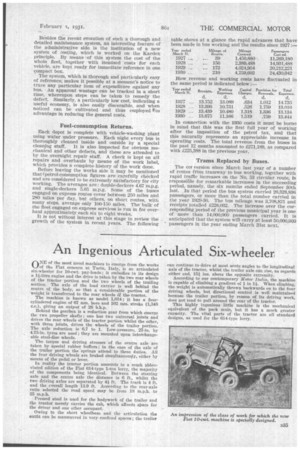 Page 53, 3rd February 1931 — An Ingenious Articulated Six-wheeler
Close
Noticed an error?
If you've noticed an error in this article please click here to report it so we can fix it.

ONE of the most novel machines to emerge from the works of the Fiat concern at Turin, Italy, is an articulated six-wheeler for 10-cwt. pay-loads -; it embodies in its design a 11-litre engine and the drive is taken by the two rear wheels of the tractor portion and the two wheels of the trailing section. The axle of the load carrier is well behind the centre of the body, so that a considerable portion of the weight is transferred to the rear wheels Of the tractor.

Behind the gearbox is a reduction gear from which emerge the two propeller shafts ; one has two universal joints and drives the rear wheels of the tractor portion whilst the other, with three joints, drives the wheels of the trailer portion. The axle reduction is 6.7 to 1. Low-pressure, 27-in. by 4.75-in. tyres are used ; they are mounted upon interchangeable steel-disc wheels.

The torque and driving stresses of the centre axle are taken by special rubber buffers; in the case of the axle of the trailer portion the springs attend to these duties. All the four driving wheels are braked simultaneously, either by means of the pedal or lever.

In reality the tractor portion amounts to a much abbreviated edition of the Fiat 614-type 1-ton lorry, the majority of the components being identical. Between the steering axle and the centre axle the distance is 6 ft., whilst the two driving axles are separated by 41 ft. The track is 4 ft. and the cverall length 13.9 ft. According to the rear-axle ratio selected the road speed may be from 18 m.p.h. to 25 m.p.h.

Pressed steel is used for the bodywork of the trailer and the tractor merely carries the cab, which affords sbace for the driver and one other occupant.

Owing to the short wheelbase and the articulation the outfit can be manceuvred in very confined spaces ; the trailer

can continue to drive at most acute angles to f he longitudinal axis of the tractor, whilst the trailer axle can rise, as regards either end, 15i ins, above the opposite extremity.

According to our contemporary Motor Italia, the machine is capable of climbing a gradient of 1 in 11. When climbing, the weight is automatically thrown backwards on to the four driving wheels, hut directional control is well maintained because the trailer portion, by reason of its driving work, does not tend to pull around the rear of the tractor.

This highly ingenious little machine is the mechanical equivalent of the pack mule, but it has a much greater capacity. The vital parts of the tractor are all standard designs, as used for the 614-type lorry.