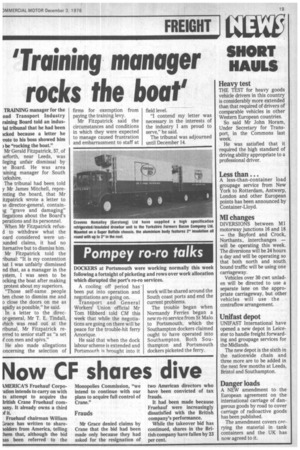 THE TEST for heavy goods vehicle drivers in this country is considerably more extended than that required of drivers of comparable vehicles in other Western European countries.

So said Mr John Horam, Under Secretary for Transport, in the Commons last week.

He was satisfied that it required the high standard of driving ability appropriate to a professional driver.

A less-than-container load groupage service from New York to Rotterdam, Antwerp, London and other European points has been announced by Container-Lloyd.

DIVERSIONS between M1 motorway junctions 16 and 18 — the Bayford and Crock, Northants., interchanges — will be operating this week. The diversions will be 24 hours a day and will be operating so that both north and south bound traffic will be using one carriageway.

Vehicles over 30 cwt unladen will be directed to use a separate lane on the appropriate carriageway, but other vehicles will use the contraflow arrangement.

UNIFAST International have opened a new depot in Leicester to handle freight forwarding and groupage services for the Midlands.

The new depot is the sixth in the nationwide chain and three more are to be added in the next few months at Leeds, Bristol and Southampton.

A NEW amendment to the European agreement on the international carriage of dangerous goods by road to cover carriage of radioactive goods has been published.

The amendment covers carrying the material in tank containers and the UK has now agreed to it,