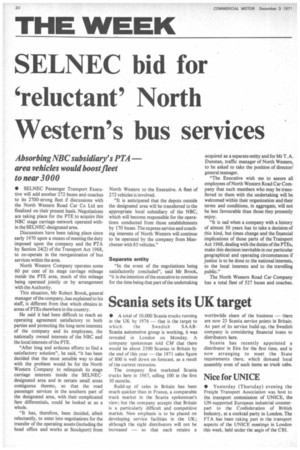 • SELNEC Passenger Transport Executive will add another 272 buses and coaches to its 2700-strong fleet if discussions with the North Western Road Car Co Ltd are finalized on their present basis. Negotiations are taking place for the PTE to acquire this NBC stage carriage network operated within the SELNEC-designated area.

Discussions have been taking place since early 1970 upon a means of meeting the duty imposed upon the company and the PTA by Section 24(2) of the Transport Act 1968, to co-operate in the reorganization of bus services within the area.

North Western Company operates some 60 per cent of its stage carriage mileage inside the PTE area, much of this mileage being operated jointly or by arrangement with the Authority.

This situation, Mr Robert Brook, general manager of the company, has explained to his staff, is different from that which obtains in areas of PTEs elsewhere in the country.

"After long and arduous efforts to find a satisfactory solution", he said, "it has been decided that the most sensible way to deal with the problem would be for the North Western Company to relinquish its stage carriage interests inside the SELNECdesignated area and in certain small areas contiguous thereto, so that the road passenger services in the southern part of the designated area, with their complicated fare differentials, could be looked at as a whole.

"It has, therefore, been decided, albeit reluctantly, to enter into negotiations for the transfer of the operating assets (including the head office and works at Stockport) from North Western to the Executive. A fleet of 272 vehicles is involved.

"It is anticipated that the depots outside the designated area will be transferred to the appropriate local subsidiary of the NBC, which will become responsible for the operations conducted from those establishments by 170 buses. The express service and coaching interests of North Western will continue to be operated by the company from Manchester with 85 vehicles.

Separate entity "In the event of the negotiations being satisfactorily concluded", said Mr Brook, "it is the intention of the executive to continue for the time being that part of the undertaking acquired as a separate entity and for Mr T. A. Dunstan, traffic manager of North Western, to be asked to take the position of director/ general manager.

"The Executive wish me to assure all employees of North Western Road Car Company that such members who may be transferred to them with the undertaking will be welcomed within their organization and their terms and conditions, in aggregate, will not be less favourable than those they presently enjoy.

"It is sad when a company with a history of almost 50 years has to take a decision of this kind, but times change and the financial implications of those parts of the Transport Act 1968, dealing with the duties of the PTEs, make this decision inevitable in our particular geographical and operating circumstances if justice is to be done to the national interests, to the local interests and to the travelling public."

The North Western Road Car Company has a total fleet of 527 buses and coaches.