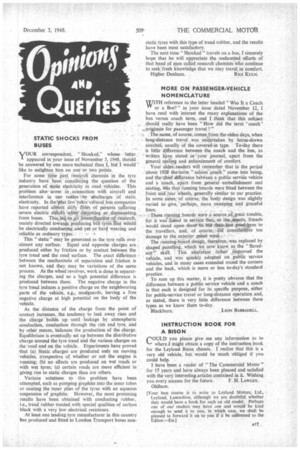 OUR in your issue of November 5, 1948, should be answered by one more technical than I, but I would like to enlighten him on one or two points. For some time past, research chemists in the tyre industry have been Considering the question of the generation of static electricity in road Vehicles. This problem also -arose in .conaection with aircraft and interference in car radios...;.by, Atischarges of static electricity. In theVist few`.yeks bus companies have reported alniciit daily 'h.fa of persons suffering severe electric shtick's '-wlitr-,.inotinting or dismounting from buses, This.,44 ih'intensihea tion -of .research, mainly directed towar4s-.PrOducing bus tyreilhat Would be electrically conduating and yet as hard wearing and reliable as ordinary types. .

This "static" may be generated as the tyre rolls over almost any surface. Equal and opposite chargesare produced either by friction or by contact between the tyre tread and the road surface. The exact difference between the mechanistfis of separation and friction is not known, and they may be variations of the same process. As the wheel revolves, work is done in separating the charges, and so a high potential difference is produced between them. The negative charge in the tyre tread induces a positive charge on the neighbouring parts of the vehicle, e.g., mudguards, leaving a free negative charge at high potential on the body of the vehicle.

As the distance of the charge from the point of contact increases, the. tendency, to leak away rises and the charge builds up until leakage by atmospheric conduction, conduction through the rirn and tyre, and by other means, balances the production of the charge. Equilibrium is eventually set up between the distributive charge around the tyre tread and the various charges on the 'road and on the vehicle. Experiments have proved that (a) Static charges are produced only on moving vehicles, irrespective of whether or not the engine is running; (b) no effects are produced on wet roads or with wet tyres; (c) certain roads are more efficient in giving rise to static charges than are others.

Various solutions to this problem have been attempted, such as pumping graphite into the inner tubes or coating the inner plies of the tyres with an aqueous suspension of graphite. However, the most promising results have been obtained with conducting rubber, i.e., tread rubber treated with special qualities of carbon black with a very low electrical resistance.

At least one leading tyre manufacturer in this country has produced and fitted to London Transport buses non MORE ON PASSENGER-VEHICLE • NOMENCLATURE WITH reference to the letter headed "Was It a Coach " or a Bus?" in your issue dated November 12, I have read with interest the many explanations of the bus versus coach term, and I think that this subject , should really have been "How did the term ' coach ' l*iiiin.a,te for passenger travel ?"

..The name, of course, comesfrOnt the olden days, when long-distance travel was undertaken by horse-drawn COacheg, usually of the covered-in type. To-day there is little difference between the coach and the bus, as writers have stated in''your journal, apart from the general sealing and enhancement of comfort.

Your old. readers will remember that in the period ; about 1928" theLterm " salOon-qoach " came into being, and the-chief difference between a public service vehicle and a coach, apart from, general embellishment and seating, that running bOards were fitted between the front and fear Wheeli, generally similar to car practice. In some cases; of eotirse,the body design was slightly varied to give, 'perhaps, more sweeping and graceful • r.These ritrining,boards were a-source ,ot_gre.at trouble, for it waCtOund in servicethat, at Ilte,z.dePots, friends would stand upon= thetrylo.,-.bidtheir*strgiied*yes to the travellers, and, of course, did consideritle toe damage to the exterior panel work.: The running-board design, therefore was replaced by shaped panelling,. which we now know, as the " flaredone' skiff. This alteration rather ...improved the

vehicle, and , was quickly. adopted on . public service

vehicles, and in many cases extended round the corners and the back, which is more or less to-day's standard practice. To sum up this matter, it is pretty obvious that the difference between a public service vehicle and a coach is that each is designed for its specific purpose, either for public-service travel or long-distance operation. and, as stated, there is very little difference between these types as we know them to-day.

INSTRUCTION BOOK FOR A BISON COULD you please give me any information as to where I might obtain a copy of the instruction book for the Leyland Bison chassis. I realize that this is a very old vehicle, but would be much obliged if you could help.

I have been a reader of "The Commercial Motor" for 15 years and have always been pleased and satisfied with the very interesting articles contained in it. Wishing you every success for the future, F. H. LAWLEY. Oldham.

[Your best course is to write to Leyland Motors, Ltd., Leyland, Lancashire, although we are doubtful whether they would have a book for such an old model. Perhaps one of our' readers may hive one and would be kind enough to send it to you, in which case, we shall he pleased to forward it on to you if it be addressed to the Editor.—En.]