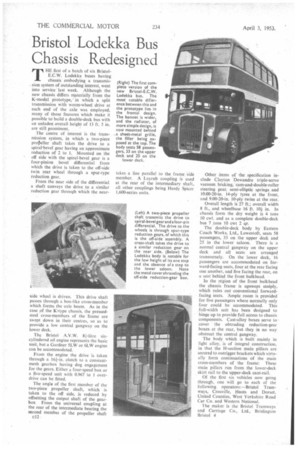 THE first of a batch of six BristolE.C.W. Lodekka buses having chassis embodying a transmission system of outstanding interest, went into service last week. Although the new chassis differs materially from the K-model prototype, in which a split transmission with worm-wheel drive at each end of the axle was employed, many of those features which make it possible to build a double-deck bus with an unladen overall height of 13 ft. 5 in. are still prominent.

The centre of interest is the transmission system, in which a two-piece profIeller shaft takes the drive to a spiral-bevel gear having an approximate reduction of 2 to 1. Mounted on the off side with the spiral-bevel gear is a four-pinion bevel differential from which the drive is taken to the off-side twin rear wheel through a spur-type reduction gear.

From the near side of the differential a shaft conveys the drive to a similar reduction gear through which the near side wheel is driven. This drive shaft passes through a box-like cross-member which forms the axle beam. As in the case ,of the K-type chassis, the pressedsteel cross-members of the frame are swept down in their centres, so as to provide a low central gangway on the lower deck.

The Bristol A.V.W. 81-litre sixcylindered oil engine represents the basic unit, but a Gardner 5LW or 6LW engine can be accommodated.

From the engine the drive is taken through a 16i-in. clutch to a constantmesh gearbox having dog engagement for the gears. Either a four-speed box or a five-speed unit with 0.967 to 1 overdrive can be fitted.

c12 takes a line parallel to the frame side member. A Layrub coupling is used at the rear of the intermediary shaft, all other couplings being Hardy Spicer 1,600-series units. Other items of the specification include Clayton Dewandre triple-servo vacuum braking, cam-and-double-roller steering gear, semi-elliptic springs and 10.00-20-in. 14-ply tyres at the front, and 9.00-20-in. 10-ply twins at the rear.

The double-deck body by Eastern Coach Works, Ltd., Lowestoft, seats 58 passengers, 33 on the upper deck and 25 in the lower saloon. There is a normal central gangway on the upper deck and all seats are arranged transversely. On the lower deck, 16 passengers are accommodated on forward-facing seats, four at the rear facing one another, and five facing the rear, on a seat behind the front bulkhead.

In the region of the front bulkhead the chassis frame is upswept steeply, which rules out conventional forwardfacing seats. 'Ample room is provided for five passengers where normally only four could be acconunodated. This full-width setit has been designed to hinge up to provide full access to chassis components. Cast-alloy boxes serve to cover the obtruding reduction-gear boxes at the rear, but they in no way obstruct the central gangway.

The body which is built mainly in light alloy, is of integral construction, in that the H-section main pillars are secured to outrigger brackets which virtually form continuations of the main cross-members of the frame-. These main pillars run from the lower-deck skirt rail to the upper-deck cant-rail.

Of the first six vehicles now going through, one will go to each of the following operators:—Bristol Tramways, Crosville, Hants and Dorset, United Counties, West Yorkshire Road Car Co. and Western National.

The maker is the Bristol Tramways and Carriage Co., Ltd., Brislington Bristol 4