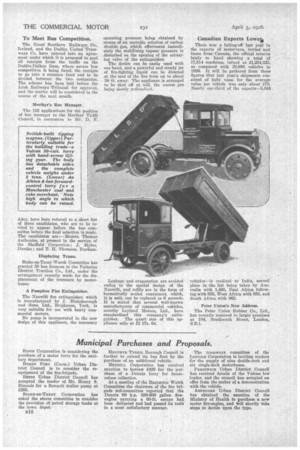 Page 50, 3rd April 1928 — Municipal Purchases and Proposals.
Close
Noticed an error?
If you've noticed an error in this article please click here to report it so we can fix it.
Keywords : Transport, Areas Within Middlesbrough, Eston, Greater Eston, Redcar And Cleveland, Lorry, Dennis Specialist Vehicles, Districts Of England, Counties Of England, Business / Finance

RIPON Corporation is considering the purchase of a motor lorry for the sanitary department.

BURRY PORT (CRIER.) Urban District Council Is to consider the reequipment of the fire-brigade.

ESTON Urban District Council has accepted the tender of Mr. Henry S. Simonis for a Renault trailer pump at £295.

STOKE-ON-TRENT Corporation has asked the stores committee to consider the provision of petrol storage tanks at the town depot.

MERTHYR TYDFIL Borough Council is further to extend its bus fleet by the purchase of an additional vehicle.

BEXHILL Corporation has received sanction to borrow £429 for the purchase of a Dennis lorry for houserefuse collection.

At a meeting of the BRIGHTON Watch Committee the chairman of the fire brigade sub-committee reported that the Dennis 60 h.p. 590-600 gallon fireengine carrying a 60-ft. escape had been delivered and had passed its tests in a most satisfactory maniter. • The tramways committee of the LINCOLN Corporation is inviting tenders for the supply of nine double-deck and six single-deck motorbuses.

PRESTWICH Urban District Council has received details of the Vulcan low loader, and the council has accepted an offer from the maker of a demonstration with the vehicle.

_AnsunAna Urban District Council has obtained the sanction of the Ministry of Health to purchase a new motor fire-engine, and will shortly take steps to decide upon the type.