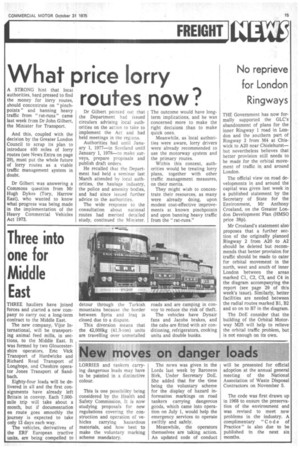 Page 17, 31st October 1975 — What price lorry routes now
Close
Noticed an error?
If you've noticed an error in this article please click here to report it so we can fix it.
Keywords : Lorry, Wagons, London Councils, Truck

that local A STRONG hint authorities, hard pressed to find the money for lorry routes, should concentrate on " pinchpoints " and banning heavy traffic from " rat-runs " came last week from Dr John Gilbert, the Minister for Transport.

And this, coupled with the decision by the Greater London Council to scrap its plan to introduce 400 miles of lorry routes (see News Extra on page 29), must put the whole future of lorry routes as a viable traffic management system in doubt.

Dr Gilbert was answering a Commons question from Mr Hugh Dykes (Tory, Harrow East), who wanted to know what progress was being made in the implementation of the Heavy Commercial Vehicles Act 1973. Dr Gilbert pointed out that the Department had issued circulars advising local authorities on the action to take to implement -the Act and had held meetings in the regions.

He recalled that the Department had held a seminar last March attended by local authorities, the haulage industry, the police and amenity bodies, and had since issued further advice to the authorities.

The wide response to the consultation about national routes had merited detailed study, continued the Minister. The outcome would have longterm implications, and he was concerned more to make the right decisions than to make quick ones.

Meanwhile, as local authorities were aware, lorry drivers were already recommended to use the motorway system and the primary routes.

Within this context, authorities would be treating lorry plans, together with other traffic management measures, on their merits.

They might wish to concentrate their resources, as many were already doing, upon modest cost-effective improvements at known pinchpoints and upon banning heavy traffic from the "rat-runs."