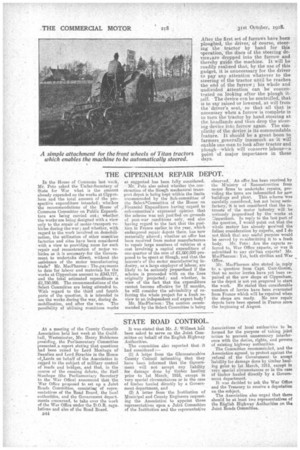 Page 20, 31st October 1918 — THE CIPPENHAM REPAIR DEPOT. '
Close
Noticed an error?
If you've noticed an error in this article please click here to report it so we can fix it.
Keywords : Cippenham, Slough

In the House of Commons last week. Mr. Peto esker' the Under-Secretary of State for War what is the amount already expended on the works at Cippenham and the total amount of the prospective expenditure intended; whether the recommendations of the House of Commons Committee on Public Expenditure are being carried out; whether the worksertre being designed with a view only to the repair of motor-transport vehicles during the war; and whether, with regard to the work involved on demobilization, the utilization of other munition factories and sites have been considered with a view to providing room for such repair and reconstruction of motor vehicles as it, is necessaryrfor the Government to underteke direct), without the assistance of the motor manufacturing trader Mr. MacPherson : The.payments to date for labour and materials for the works at Cippenham amount to £343,717, and the total estimated expenditure is £1,750,000. The recommendations of the Select Committee are being attended to. With regard to the third and fourth parts of the question, it is intended to use the works during.the war, during demobilization, and after the war. The possibility of utilizing munitions works as suggested has been fully considered. Mr. Peto also asked whether the,construction of the Slough mechanical. transport depot is being kept within the limits recommended by the Sub-committee of the SelectrCommittee of the House on Financial Expenditure having regard to sub-commttee's expressed opinioe that the scheme was not justified on grounds of post-war conditions only, and also having regard to the fact that the position in France earliere in the year, which endangered repair depots there, has now materially altered ; whether an offer has been received from motor manufacturers to repair large numbers of vehicles at a cost involving a capital expenditure of one-quarter of the sum of £1,000,000 proposed to be spent at Slough, and that the ineeresis of the motor manufacturing industry, as a, large employer of labour, are likely to be seriously jeopardized if the scheme is proceeded with on the lines originally projected; and whether, in view of the fact that the expenditure cannot become effective for 12 months, he will consider the advisability of referring the whole project for a fresh review to are independent and expert body? Mr. MacPheraon : The caution recommended by the Select Committee is being observed. An offer has been received by the Ministry of 'Reconstruction from motor firms to undertake repairs, providing the firms are indemnified for new buildings and plant. This scheme was carefully considered, but not being satisfactory, it is not considered that the interests of the motor industry will be seriously jeopardized by the works at, Dippenham. In reply to the last part of the question, I would point out that the whole matter has already leceived the fullest consideration by experts, and I do not ,think that any useful purpose would be served by re-submitting it to a fresh body. Mr. Pete: Are the experts referred to, War Office experts, or was it submitted to any civilian experts? Mr. MacPherson : Yes, both civilian and War Office.

Mr. MacPherson also stated in reply to a question from Capt. Carr-Gomm, that no motor lorries have yet been repaired at the new shops at Cippenham, as. the depot is not yet prepared to start the vi ork. He stated that considerable numbers of lorries have been evacuated from France which will be repaired when the shops are ready. No new repair depots have been opened in France since the beginning of August.