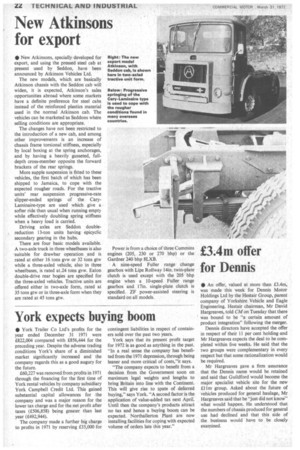 Page 24, 31st March 1972 — 0.4m offer for Dennis
Close
Noticed an error?
If you've noticed an error in this article please click here to report it so we can fix it.
Keywords : Dennis Specialist Vehicles, Hargreaves, Guildford, Business / Finance

• An offer, valued at more than £3.4m, was made this week for Dennis Motor Holdings Ltd by the Hestair Group, parent company of Yorkshire Vehicle and Eagle Engineering. Hestair chairman, Mr David Hargreaves, told CM on Tuesday that there was bound to be "a certain amount of product integration" following the merger.

Dennis directors have accepted the offer in respect of their 11 per cent holding and Mr Hargreaves expects the deal to be completed within five weeks. He said that the two groups were complementary in every respect but that some rationalization would be required.

Mr Hargreaves gave a firm assurance that the Dennis name would be retained and said that Guildford would become the major specialist vehicle site for the new £11m group. Asked about the future of vehicles produced for general haulage, Mr Hargreaves said that he "just did not know" what would happen. He understood that the numbers of chassis produced for general use had declined and that this side of the business would have to be closely examined.