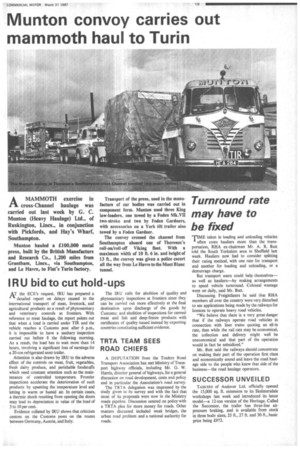 Page 21, 31st March 1967 — TRTA TEAM SEES ROAD CHIEFS
Close
Noticed an error?
If you've noticed an error in this article please click here to report it so we can fix it.
Keywords : Types Of Roads, Ministry Of Transport, Transportation In Colombia, Road, Disaster / Accident

A DEPUTATION from the Traders Road Transport Association has met Ministry of Transport highway officials, including Mr. G. W. Harris, director general of highways, for a general discussion on road development, costs and policy and in particular the Association's road survey.

The TRTA delegation was impressed by the study given to its survey and with the fact that most of its proposals were now in the Ministry roads pipeline. Discussion centred on policy with a TRTA plea for more money for roads. Other matters discussed included weak bridges, the urban road problem and a national authority for roads.