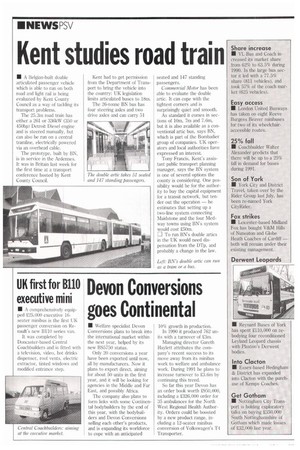 Page 20, 31st January 1991 — Share increase
Close
Noticed an error?
If you've noticed an error in this article please click here to report it so we can fix it.
Keywords : Buses, Road Transport, Counties Of England, Plaxton, Leyland Leopard, United Kingdom

• Coachbuilder Walter Alexander predicts that there will be up to a 25% fall in demand for buses during 1991.

• York City and District Travel, taken over by the Rider Group last July, has been re-named York CityRider.

• Leicester-based Midland Fox has bought V&M Hills of Nuneaton and Globe Heath Coaches of Cardiff — both will remain under their existing management,

Into Clacton II Essex-based Hedingham & District has expanded into Clacton with the purchase of Kernps Coaches.

• Nottingham City Transport is holding exploratory talks on buying £350,000 South Nottinghamshire of Gotham which made losses of £32,000 last year.