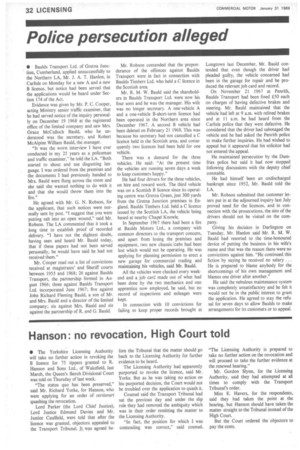 • The Yorkshire Licensing Authority will take no further action in revoking the B licence for 75 tippers granted to R. Hanson and Sons Ltd., of Wakefield, last March, the Queen's Bench Divisional Court was told on Thursday of last week.

"The status quo has been preserved," said Mr. Richard Yorke, for Hanson, who were applying for an order of certiorari quashing the revocation.

Lord Parker (the Lord Chief Justice), Lord Justice Edmund Davies and Mr. Justice Caulfield, were told that after the licence was granted, objectors appealed to the Transport Tribunal. It was agreed be

fore the Tribunal that the matter should go back to the Licensing Authority for further evidence to be heard.

The Licensing Authority had apparently purported to revoke the licence, said Mr. Yorke. But as he was taking no action on his purported decision, the Court would not be troubled over the application to quash it.

Counsel said the Transport Tribunal had sat the previous day and under the slip rule they had removed the ambiguity which was in their order remitting the matter to the Licensing Authority.

"In fact, the position for which I was contending was correct," said counsel. "The Licensing Authority is prepared to take no further action on the revocation and will proceed to take the further evidence at the renewed hearing."

Mr. Gordon Slynn, for the Licensing Authority, said they had attempted at all times to comply with the Transport Tribunal's order.

Miss E. Havers, for the respondents, said they had taken the point at the hearing, but Hanson should have taken the matter straight to the Tribunal instead of the High Court.

But the Court ordered the objectors to pay the costs.