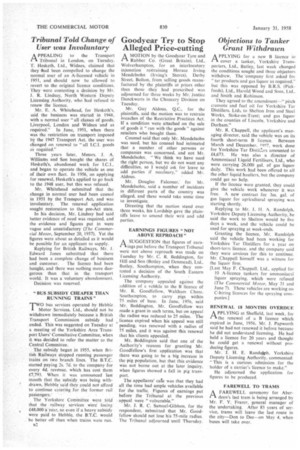 Page 36, 31st January 1958 — Objections to Tanker Grant Withdrawn
Close
Noticed an error?
If you've noticed an error in this article please click here to report it so we can fix it.
Keywords : Business Law, License, Business / Finance

A PPLYING for a new B licence to r-t cover a tanker, Yorkshire Transporters, Ltd., Batley, last week changed the conditions sought and three objectors withdrew. The -company first asked foi "tar products and gas liquor as required." but this was opposed by B.R.S. (Pickfords), Ltd., Harold Wood and Sons, Ltd., and Smith and Robinson.

They agreed to the amendment—" pitch creosote and fuel oil for Yorkshire Tar Distillers, Ltd :\ to Shelton Iron and Steel Works. Stoke-on-Trent: and gas liquor in the counties of Lincoln. Yorkshire and Du rham."

Mr. R. Chappell. the applicant's managing director, said the vehicle was on its fourth short-term B licence. Between March and December. 1957, work done for Yorkshire Tar Distil2ers amounted to £4,673. He was also a director of Ammoniacal liquid •Fertilisers, Ltd., who were carrying 26,000 gal, of gas liquor daily. This work had been offered to all the other liquid hauliers, but the company could get no help.

If the licence were granted, they could give the vehicle work whenever it was free. A new contract for 3m. gal. of gas liquor for agricultural spraying was starting shortly.

Replying to Mr. J. 11. A. Randolph, Yorkshire Deputy Licensing Authority, he said the work to Shelton would be five days a week, and the vehicle could be used for spraying at week-ends.

Granting the licence, Mr. Randolph said the vehicle had been working for Yorkshire Tar Distillers for a year on short-term licence, and the company said they were anxious for this to continue. Mr. Chappell himself was a witness for the liquor firm.

[Last May F. Chappell. Ltd., applied for 10 A-licence tankers for ammoniacal liquor spraying, which were refused (The Commercial Motor, May 31 and June 7). These vehicles arc working on C-hiring licences for the spraying companies:1 RENEWAL 18 MONTHS OVERDUE A PPLYING at Sheffield, last week, for the renewal of a B licence which expired in June, 1956. Mr. J. Papworth said he had not renewed it before because he did not understand licensing. He had held a licence for 20 years and thought he could get a renewal without producing figures.

Mr. J. H. E. RandoIsth. Yorkshire Deputy Licensing Authority, commented: "This is a curious admission for the holder of a carrier's licence to make." He adjourned the application for figures to be produced.

A FAREWELL ceremony for Aberdeen's last tram is being arranged by Mr. F. Y. Frani-. general manager of the undertaking. After 83 years of service, trams will leave the last route in the city—Don to Dee—on May 4, when buses will take over.