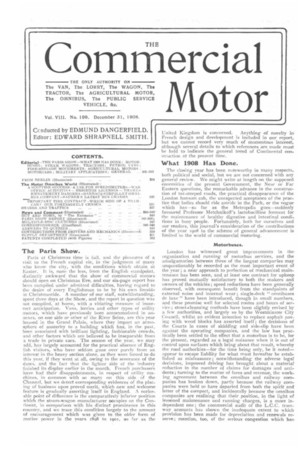 Page 1, 31st December 1908 — The Paris Show.
Close
Noticed an error?
If you've noticed an error in this article please click here to report it so we can fix it.

Paris at Christmas time is full, and the pleasures of a visit to the French capital vie, in the judgment of many who know the city, with the conditions which obtain at Easter. It is, none the less, from the English standpoint, distinctly awkward that the show of commercial motors should open on Christmas Eve, and our six-page report has been compiled under admitted difficulties, having regard to the desire of every Englishman to be by his own fireside at Christmastide. A member of our staff, notwithstanding, spent three days at the Show, and the report in question was not compiled, at home, with a vitiating measure of incorrect anticipation. Vans, lorries and other types of utility motors, which have previously been accommodated in annexes, on one side or other of the River Seine, are this year housed in the Grand Palais, where they Impart an atmosphere of austerity to a building which has, in the past, been associated with brilliant lighting-, fashionable crowds, and other factors which are believed to be inseparable from a trade in private cars. The season of the year, we may add, has largely accounted for the practical absence of English visitors, who have seldom gone over purely from an interest in the heavy section alone, as they were forced to do this year, if they went at all, owing to the severance of the dates, and the fact that the lighter side of the industry finished its display earlier in the month. French purchasers have had their disappointments, in respect of utility machines, in common with so many on this side of the Channel, but we detect corresponding evidences of the placing of business upon proved merit, which new and welcome feature is gradually asserting itself in England. A noticeable point of difference is the comparatively inferior position which the steam-wagon manufacturer occupies on the Continent, in comparison with his distinct prominence in this country, and we trace this condition largely to the amount of encouragement which was given to the older form of motive power in the years 1803 to toot, so far as the

United Kingdom is concerned. Anything of novelty in. French design and development is included in our report, but we cannot record very much of momentous interest, although several details to which references are made must be held to indicate the general trend of Continental construction at the present time.