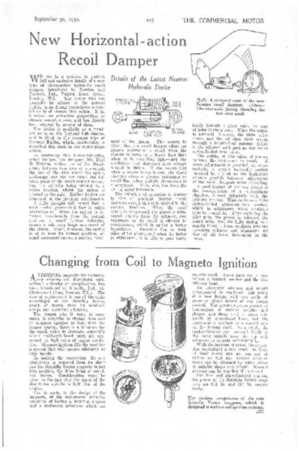 WE are in a position to publish full and exclusive details of a new type of piston-action hydraulic recoil damper, introduced by Newton and Bennett, Ltd., Valetta Road, Acton, Lendon WA. The device will not normally be offered to the general public, as its fitting necessitates a careful study of chassis blue prints. It is, however, an attractive proposition to chassis manufacturers, and has already been adopted by several of them.

The device is available as a standard extra on the Leyland Cub chassis, and is fitted to the overseas type of Commer Raider, which, incidentally, is described this week in our centre-pages article. •

In producing this horizontal-action recoil damper, the designer, Mr. Noel B. Newton, makes use of the discrepancy between two arcs of movement, the arc of the axle about the spring anchorage and the arc about the fulcrum point of the recoil-damper mounting, the cylinder being pivoted to a frame bracket, whilst the piston is pivoted to the axle. Rubber bushes are employed at the pivoting attachments.

meat of the piston. This means, in effect, that the recoil damper offers far greater resistance to recoil when the chassis is carrying a heavy load than when it is travelling light—just the -conditions that designers have always wanted to obtain. It also means that when a seNere bump is met, the shock absorber offers a greater resistance to recoil than when a slight obstruction is encountered. This, also, has been the aim of many inventors. •

The principle of operation is .similar • to that of previous Newton recoil' dampers, except•that it is applied-in the reverse direction. When the road' spring is compressed, the piston is withdrawn slightly from the cylinder, and resistance to the recoil is effected in compression, which is rather a better

hypothesis. Emulsion lies on both sides of the piston, and when the latter is withdrawn, it is able to pass fairly

freely through a plate valve by way of holes in the piston. When the action is reversed, however, the plate valve closes, and the oil then must return through a longitudinal passage drilled in the cylinder wall, past an adjustable spring-loaded cone N alve.

The setting of this valve, of course, controls the resistance to recoil. A screw adjustment is provided, or, alternatively, a simple hydraulic control operated by a knob on the dashboard renders possible balanced adjustment of therecoil dampers while travelling.

A good feature of the new device is the incorporation of a replenishing chamber, formed integrally with the cylindar casting. This contains a light spring-loaded piston-and-cup washer, which is withdrawn when emulsion is to be poured in. After replacing the filler, plug, the piston is released, the result being that the light Spring constantly tends to force emulsion into the operating cylinder and eliminates all fear of air locks developing in the latter.