Turbo Gardner is unveiled at 'ninon 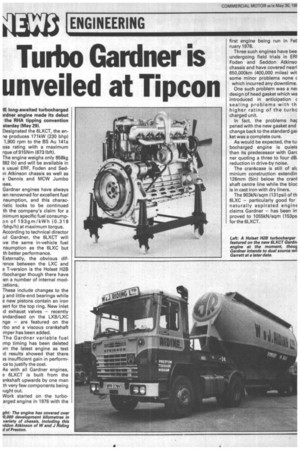 Page 26, 30th May 1981 — Turbo Gardner is unveiled at 'ninon
Close
Noticed an error?
If you've noticed an error in this article please click here to report it so we can fix it.

The engine weighs only 858kg 392 lb) and will he available in a usual ERF, Foden and Sodin Atkinson chassis as well as e Dennis and MCW Jumbo ises.

Gardner engines have always :en renowned for excellent fuel nsumption, and this characristic looks to be continued th the company's claim for a inimum specific fuel consumpD n of 193gm/kWh (0.318 flahp/h) at maximum torque. According to technical director lul Gardner, the 6LXCT will lye the same in-vehicle fuel nsumption as the 6LXC but th better performance.

Externally, the obvious difrence between the LXC and • T-version is the Holset H2B rbocharger though there have :en a number of internal modntions.

These include changes to the g and little-end hearings while e new pistons contain an iron 3ert for the top ring. New inlet d exhaust valves — recently 3ndardised on the LXB/LXC nge — are featured on the rho and a viscous crankshaft mper has been added.

The Gardner variable fuel imp timing has been deleted 3m the latest engine as test :d results showed that there insufficient gain in performce to justify the cost.

As with all Gardner engines, a 6LXCT is built from the nkshaft upwards by one man th very few components being lught out.

Work started on the turboarged engine in 1976 with the first engine being run in Fet ruary 1978.

Three such engines have bee undergoing field trials in ERf Foden and Seddon Atkins° chassis and have covered nearl 650,000km (400,000 miles) wit some minor problems none c which incurred any downtime.

One such problem was a ne% design of head gasket which wa introduced in anticipation c sealing problems with th higher rating of the turbc charged unit.

In fact, the problems har pened with the new gasket and change back to the standard ga: ket was a complete cure.

As would be expected, the tui bocharged engine is quietE than its predecessor with Garc nor quoting a three to four dB, reduction in drive-by noise.

The crankcase is still of alt. minium construction extendin 126mm (Sin) below the crani shaft centre line while the bloc is in cast iron with dry liners.

The 903kN/sqm (131psi) of th 6LXC particularly good for naturally aspirated engint claims Gardner — has been irr proved to 1055kN/sqm (153ps for the 6LXCT.