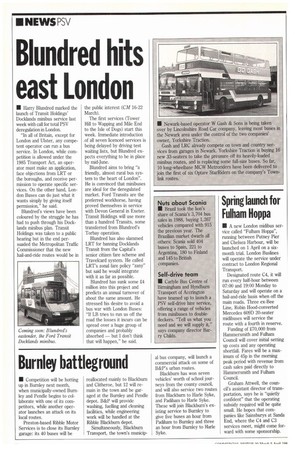 Page 18, 30th March 1989 — Burnley battleground
Close
Noticed an error?
If you've noticed an error in this article please click here to report it so we can fix it.

• Competition will be hotting up in Burnley next month, when municipally-owned Burnley and Pendle begins to collaborate with one of its competitors, while another operator launches an attack on its local routes.

Preston-based Ribble Motor Services is to close its Burnley garage: its 40 buses will be reallocated mainly to Blackburn and Clitheroe, but 12 will remain in the town and be garaged at the Burnley and Pendle depot. B&P will provide washing, fuelling and cleaning facilities, while engineering work will be handled at the Ribble Blackburn depot.

Simultaneously, Blackburn Transport, the town's municip al bus company, will launch a commercial attack on some of B&P's urban routes.