Through traffic ban for Oxford Street 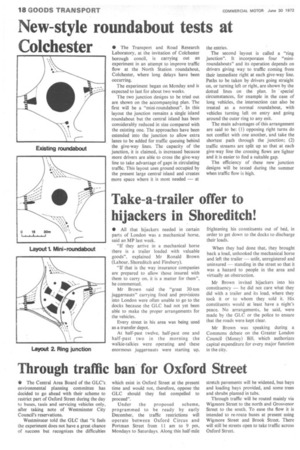 Page 20, 30th June 1972 — Through traffic ban for Oxford Street
Close
Noticed an error?
If you've noticed an error in this article please click here to report it so we can fix it.
Keywords : Oxford Street, Wigmore Street, Human Interest, Environment

• The Central Area Board of the GLC's environmental planning committee has decided to go ahead with their scheme to restrict part of Oxford Street during the day to buses, taxis and servicing vehicles only, after taking note of Westminster City Council's reservations.

Westminster told the GLC that "it feels the experiment does not have a great chance of success but recognizes the difficulties which exist in Oxford Street at the present time and would not, therefore, oppose the GLC should they feel compelled to proceed".

Under the proposed scheme, programmed to be ready by early December, the traffic restrictions will operate between Oxford Circus and Portman Street from II am to 9 pm, Mondays to Saturdays. Along this half-mile stretch pavements will be widened, bus bays and loading bays provided, and some trees and shrubs planted in tubs.

Through traffic will be routed mainly via Wigmore Street to the north and Grosvenor Street to the south. To ease the flow it is intended to re-route buses at present using Wigmore Street and Brook Street. There will still be streets open to take traffic across Oxford Street.