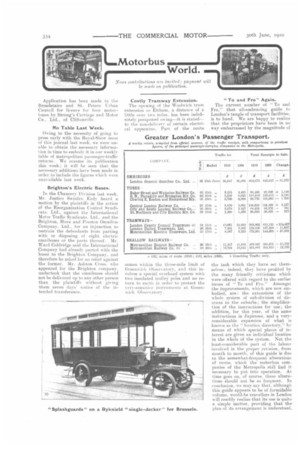 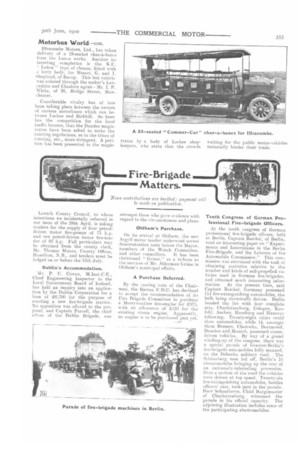 Page 8, 30th June 1910 — Motorbus World.
Close
Noticed an error?
If you've noticed an error in this article please click here to report it so we can fix it.
Keywords : Brighton, Brighton And Hove, Monarch's Way, Luton, Tram, Lochee, Nottingham

News contributions are invited: payment will be made on publication.

Application has been made to the Broadstairs and St. Peters Urban Council for licence for four motorbuses by Strong's Carriage and Motor Co., Ltd., of Cliftonville.

Owing to the necessity of going to press early with the Royal-Show issue of this journal last week, we were linable to obtain the necessary information in time to embody it in our weekly table of metropolitan passenger-traffic returns. We resume its publication this week ; it will he seen that the necessary additions have been made in order to include the figures which were unavailable last week.

In the Chancery Division last week, Mr. Justice Swinfen Eady heard a motion by the plaintiffs in the action of the Reorganization Control Syndicate, Ltd., against the International Motor Traffic Syndicate, Ltd., and the Brighton, Hove and Preston Omnibus Company. Ltd.. for an injunction to restrain the defendants from parting with or disposing of eight electric omnibuses or the parts thereof. Mr. Ward Coldridge said the International Company had already parted with the buses to the Brighton Company, and therefore he asked for no relief against the former. Mr. Ashton Cross. who appeared for the Brighton company. undertook that the omnibuses should not be delivered up to any other person than the plaintiffs without giving them seven days' notice of the intended transference.

Costly Tramway Extension. The opening of the Woolwich tram extension to Eltharn, a distance of a little over two miles, has been indefinitely postponed owing-it is statedto the non-delivery of certain electrical apparatus, Part of the route comes within the three-mile limit of Greenwich Observatory, and this involves a special overhead system with two insulated trolley poles and no return to ea.rth in order to protect the very-sensitive instruments at Greenwich Observatory. "To and Pro" Again.

The current number of To and Fro," that all-embracing guide to London's tangle of transport facilities, is to hand. We are happy to realize that the proprietors have been in no way embarrassed by the magnitude of the task which they have set themselves ; indeed, they have profited by the many friendly criticisms which were offered with regard to the earlier issues of " To and Fro." Amongst the improvements, which are now embodied, are: the extensions of the whole system of sub-division of districts to the suburbs ; the simplification of the instructions for use; the addition, for this year, of the same instructions in Japanese, and a veryconsiderable expansion of what is known as the " location directory," by means of which special places of interest are given an individual location in the whole of the system. Not the least-considerable part of the labour involved in the proper revision, from month to month, of this guide is due to the somewhat-frequent alterations of route, which the nuitorbus companies of the Metropolis still find it necessary to put into operation. .As time goes on, of course, these alterations should not be so frequent.. In conclusion, we may say that, although this guide appears to be of formidable volume, would-he travellers in London will readily realize that its use is quite a simple matter, providing that the, plan of its arrangement is understood_

Ilfracombe Motors, Ltd., has taken delivery of a 23-seated char-a-banes from the Luton works. Another interesting completion is the K.C.

Luton " type of chassis, fitted with a lorry body, for Messrs. G. and I. Shepherd, of Bacup. This last vehicle was ordered through the maker's Lancashire and Cheshire agent—Mr. 1. P. White, of 26, Bridge Street, Manchester.

Considerable rivalry has of late been taking place between the owners of various motorbuses which run between Lochee and 13irkhill. So keen has the competition for the local traffic become, that the Dundee magistrates have been asked to make the existing regulations, as to the times of running, etc., more stringent. A petition has been presented to the magis

trates by a body of Lochee shopkeepers, who state that the crowds waiting for the public motor-vehicles materially hinder their trade.