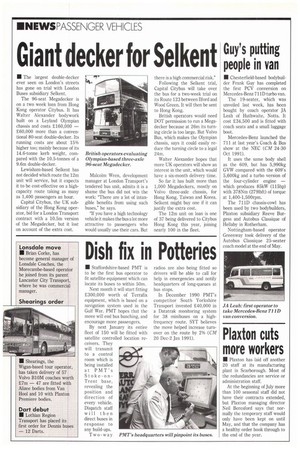 • The largest double-decker ever seen on London's streets has gone on trial with London Buses subsidiary Selkent.

The 96-seat Megadecker is on a two week loan from Hong Kong operator Citybus. It has Walter Alexander bodywork built on a Leyland Olympian chassis and costs £160,000 — £60,000 more than a conventional 80-seat double-decker. Its running costs are about 15% higher too; mainly because of its 14.6-tonne kerb weight, compared with the 10.5-tonnes of a 9.6m double-decker.

Lewisham-based Selkent has not decided which route the 12m unit will service, but it expects it to be cost-effective on a highcapacity route taking as many as 1,400 passengers an hour.

Capital Citybus, the UK subsidiary of the Hong Kong operator, bid for a London Transport contract with a 10.5m version of the Megadecker, but it lost on account of the extra cost. Malcolm Wren, development manager at London Transport's tendered bus unit, admits it is a shame the bus did not win the work: "There are a lot of intangible benefits from using such buses," he says.

"If you have a high technology vehicle it makes the bus a lot more attractive to passengers who would usually use their cars. But there is a high commercial risk," Following the Selkent trial, Capital Citybus will take over the bus for a two-week trial on its Route 123 between Ilford and Wood Green. It will then be sent to Hong Kong.

British operators would need DOT permission to run a Megadecker because at 26m its turning circle is too large. But Volvo Bus, which makes the Olympian chassis, says it could easily reduce the turning circle to a legal 24m, Walter Alexander hopes that more UK operators will show an interest in the unit, which would have a six-month delivery time.

So far it has built more than 1,000 Megadeckers, mostly on Volvo three-axle chassis, for Hong Kong, Taiwan and Korea. Selkent might buy one if it can justify the extra cost.

The 12m unit on loan is one of 37 being delivered to Citybus Hong Kong this year, joining nearly 100 in the fleet.