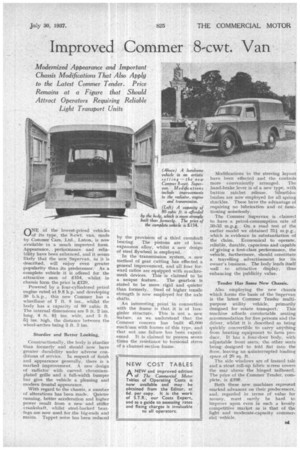 Page 35, 30th July 1937 — Improved Commer 8-cwt. Van
Close
Noticed an error?
If you've noticed an error in this article please click here to report it so we can fix it.

ONE of the lowest-priced vehicles of its type, the 8-cwt. van, made by Commer Cars, Ltd., Luton, is now available in a much improved form. Appearance, performance and reliability have been enhanced, and it seems likely that the new Supervan, as it is described, will enjoy even greater popularity than its predecessor. As a -complete vehicle it is offered for the attractive sum of £154, whilst in chassis form the price is 2120.

Constructionally, the body is sturdier than formerly and should now haye greater durability under adverse conditions of service. In respect of finish and appearance generally, there is a marked improvement. A new design of radiator with curved chromiumplated grille and a full-width bumper bar give the vehicle a pleasing and modern frontal appearance.

With regard to the chassis, a number of alterations has been made. Quieter running, better acceleration and higher power result from a new and stiffer crankshaft, whilst steel-backed bearings are now used for the big-ends and mains. Tappet noise has been reduced

by the provision of a third camshaft bearing. The pistons are of lowexpansion alloy, whilst a new design

of steel flywheel is employed. •

In the -transmission system, a new method of gear cutting has effected a general improvement, and all four forward ratios are equipped with synchromesh devices, This is claimed to be

a unique feature. The gearbox is stated to be more rigid and quieter than formerly. Steel of higher tensile strength is now employed for the axle shafts.

An interesting point in connection with the frame is that, it is of boxgirder structure. This is not a new feature, as we understand that the Commer concern has built 45,000 machines with frames of this type, and that not one failure has been experienced. It is claimed to possess seven times the resistance to torsional stress of a channel-section frame.

Modifications to the steering layout have been effected and the controls more conveniently arranged. The hand-brake lever is of a new type, with button ratchet release. Silentbloc bushes are now employed for all spring shackles. These have the advantage of requiring no lubrication and of functioning noiselessly.

The Commer Supervan is claimed to have a petrol-consumption rate of ,30433 m.p.g. On a road test of the earlier model we obtained 31i m.p.g., which is evidence in substantiation of the claim. Economical to operate, reliable, durable, capacious and capable of giving a first-class performance, the vehicle, furthermore, should constitute 'a travelling advertisement for its owner's business. The body lends itself well to attractive display, thus enhancing the publicity value.

Also employing the new chassis which forms the basis of the Supervan is the latest Commer Tender multipurpose utility vehicle, primarily designed for estate transport. This machine affords comfortable seating accommodation for five persons and the driver, whilst it is described as being quickly convertible to carry anything from hunting equipment to farm produce. It has a four-door body, with adjustable front seats, the other seats beingdesigned to fold flat into the floor, leaving an uninterrupted loading space of 20 sq. ft.

The side windows are of framed talc and a stout roll-up fabric screen covers the rear above the hinged tailboard. The price of the Commer Tender, complete, is £199.

Both these new machines represent marked advances on their predecessors, and, regarded in terms of value for money, must surely he hard to improve upon even in such a keenly competitive market as is that of the light and moderate-capacity commercial vehicle.