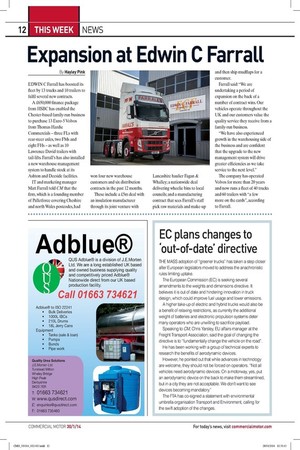 Page 8, 30th January 2014 — Expansion at Edwin C Farrall
Close
Noticed an error?
If you've noticed an error in this article please click here to report it so we can fix it.

EDWIN C Farrall has boosted its fleet by 13 trucks and 10 trailers to fulfil several new contracts.

A £650,000 finance package from HSBC has enabled the Chester-based family-run business to purchase 13 Euro-5 Volvos from Thomas Hardie Commercials — three FLs with rear-steer axles, two FMs and eight FHs — as well as 10 Lawrence David trailers with tail-lifts. Farrall's has also installed a new warehouse management system to handle stock at its Ashton and Deeside facilities. IT and marketing manager Matt Farrall told CM that the firm, which is a founding member of Palletforce covering Cheshire and north Wales postcodes, had

won four new warehouse customers and six distribution contracts in the past 12 months. These include a £5m deal with an insulation manufacturer through its joint venture with Lancashire haulier Fagan & Whalley; a nationwide deal delivering wheelie bins to local councils; and a manufacturing contract that sees Farrall's staff pick raw materials and make-up

and then ship mudflaps for a customer.

Farrall said: "We are undertaking a period of expansion on the back of a number of contract wins. Our vehicles operate throughout the UK and our customers value the quality service they receive from a family-run business.

"We have also experienced growth in the warehousing side of the business and are confident that the upgrade to the new management system will drive greater efficiencies as we take service to the next level."

The company has operated Volvos for more than 20 years and now runs a fleet of 40 trucks and 60 trailers with "a few more on the cards", according to Farrall.