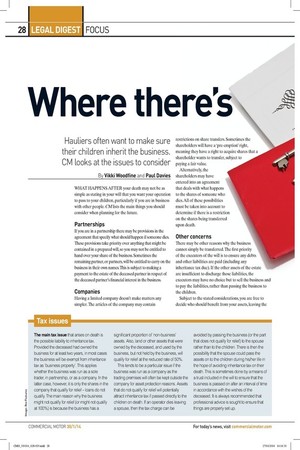 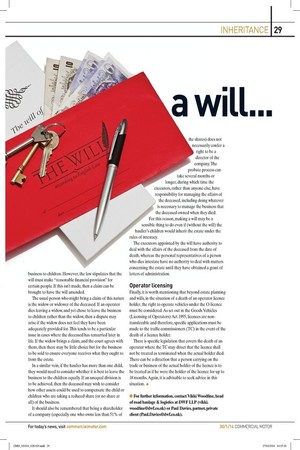 Page 22, 30th January 2014 — Where there's
Close
Noticed an error?
If you've noticed an error in this article please click here to report it so we can fix it.

Hauliers often want to make sure their children inherit the business. CM looks at the issues to consider By Vikki Woodfine and Paul Davies

WHAT HAPPENS AFTER your death may not be as simple as stating in your will that you want your operation to pass to your children, particularly if you are in business with other people. CM lists the main things you should consider when planning for the future.

If you are in a partnership there may be provisions in the agreement that specify what should happen if someone dies. These provisions take priority over anything that might be contained in a prepared will, so you may not be entitled to hand over your share of the business. Sometimes the remaining partner, or partners, will be entitled to carry on the business in their own names. This is subject to making a payment to the estate of the deceased partner in respect of the deceased partner's financial interest in the business.

Having a limited company doesn't make matters any simpler. The articles of the company may contain restrictions on share transfers. Sometimes the shareholders will have a 'pre-emption' right, meaning they have a right to acquire shares that a shareholder wants to transfer, subject to

Alternatively, the shareholders may have entered into an agreement that deals with what happens to the shares of someone who dies. All of these possibilities must be taken into account to determine if there is a restriction on the shares being transferred upon death.

There may be other reasons why the business cannot simply be transferred. The first priority of the executors of the will is to ensure any debts and other liabilities are paid (including any inheritance tax due). If the other assets of the estate are insufficient to discharge those liabilities, the executors may have no choice but to sell the business and to pay the liabilities, rather than passing the business to the children. Subject to the stated considerations, you are free to decide who should benefit from your assets, leaving the

business to children. However, the law stipulates that the will must make "reasonable financial provision" for certain people. If this isn't made, then a claim can be brought to have the will amended.

The usual person who might bring a claim of this nature is the widow or widower of the deceased. If an operator dies leaving a widow, and yet chose to leave the business to children rather than the widow, then a dispute may arise if the widow does not feel they have been adequately provided for. This tends to be a particular issue in cases where the deceased has remarried later in life. If the widow brings a claim, and the court agrees with them, then there may be little choice but for the business to be sold to ensure everyone receives what they ought to from the estate.

In a similar vein, if the haulier has more than one child, they would need to consider whether it is best to leave the business to the children equally. If an unequal division is to be achieved, then the deceased may wish to consider how other assets could be used to compensate the child or children who are taking a reduced share (or no share at all) of the business. It should also be remembered that being a shareholder of a company (especially one who owns less than 51% of the shares) does not necessarily confer a right to be a director of the company. The probate process can take several months or longer, during which time the executors, rather than anyone else, have responsibility for managing the affairs of the deceased, including doing whatever is necessary to manage the business that the deceased owned when they died. For this reason, making a will may be a

sensible thing to do even if (without the will) the haulier's children would inherit the estate under the rules of intestacy.

Finally, it is worth mentioning that beyond estate planning and wills, in the situation of a death of an operator licence holder, the right to operate vehicles under the 0-licence must be considered. As set out in the Goods Vehicles (Licensing of Operators) Act 1995, licences are nontransferable and therefore, specific applications must be made to the traffic commissioners (TC) in the event of the death of a licence holder. There is specific legislation that covers the death of an operator where the TC may direct that the licence shall not be treated as terminated when the actual holder died. There can be a direction that a person carrying on the trade or business of the actual holder of the licence is to be treated as if he were the holder of the licence for up to 18 months. Again, it is advisable to seek advice in this situation. •

significant proportion of 'non-business' assets. Also, land or other assets that were owned by the deceased, and used by the business, but not held by the business, will qualify for relief at the reduced rate of 50%. This tends to be a particular issue if the business was run as a company as the trading premises will often be kept outside the company for asset protection reasons. Assets that do not qualify for relief will potentially attract inheritance tax if passed directly to the children on death. If an operator dies leaving a spouse, then the tax charge can be

avoided by passing the business (or the part that does not qualify for relief) to the spouse rather than to the children. There is then the possibility that the spouse could pass the assets on to the children during his/her life in the hope of avoiding inheritance tax on their death. This is sometimes done by a means of a trust included in the will to ensure that the business is passed on after an interval of time in accordance with the wishes of the deceased. It is always recommended that professional advice is sought to ensure that things are properly set up.