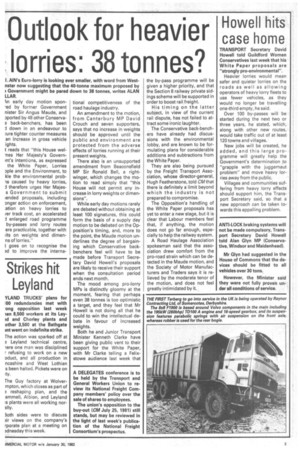 Heavier lorries would mean safer and quieter lorries on the roads as well as allowing operators of heavy lorry fleets to use fewer vehicles, as they would no longer be travelling one-third empty, he said.

Over 100 by-passes will be started during the next two or three years, he stated, which, along with other new routes, would take traffic out of at least 120 towns and villages.

New jobs will be created, he added, and this large programme will greatly help the Government's determination to "grapple with the juggernaut problem" and move heavy lorries away from the public.

Villages and communities suffering from heavy lorry effects should support him, the Transport Secretary said, so that a new approach can be taken towards this appalling problem.

Mr Glyn had suggested in the House of Commons that the devices should be fitted to all vehicles over 30 tons.

However, the Minister said they were not fully proven under all conditions of service.