A Move in the Right Direction. 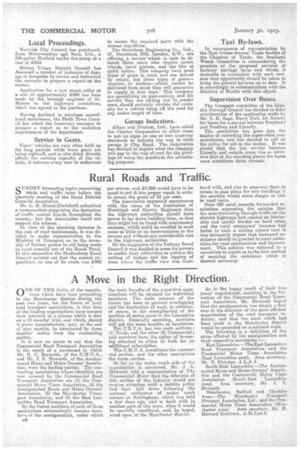 Page 8, 30th January 1923 — A Move in the Right Direction.
Close
Noticed an error?
If you've noticed an error in this article please click here to report it so we can fix it.
Keywords : Lancashire, Manchester, Irwell Valley

oNE OF THE fruits of the negotiations which have been proceeding in the Manchester district during the past two years, for the fission of local road transport associations, is that four of the leading organizations have merged their interests in a scheme which is now on a 12 months' trial, and which, should it prove unsatisfactory, may, at the end of nine months, be terminated by three months' notice from the contracting parties.

It is now no secret to say that the Commercial Reed Transport Association is the result of a movement in which Mr. R. C. Reynolds, of the C.M.U.A.,

By the fusion members of each of these associations automatically become memhere. of -the amalgamation, under which 48 the main benefits of the respective organizations will be retained for individual members. The main purpose of the fusion has been to prevent overlapping and the duplication of work, in addition, of course, to the strengthening of the position of motor users in the Lancashire district. Generally speaking, members will get the same benefits as heretofore. The C.R.T.A. has two main sections : (I) Trade. and the other (2) Commercial ; and members have the option of becoming attached to either or both for an additional subscription.

The C.M.U.A. constitutes the commercial section, and the other associations the trade section.

So far as the motor coach side of the organization is concerned. Mr. J. S. Howarth told a representative of The Commercial Motor that the in'terests of this section of the industry would not receive attention until a definite policy had been laid down following the national conference of motor coach owners at Nottingham, which was held a few days ago, and is dealt with in another part of this issue, when it would be carefully considered, and, he hoped, acted upon in the Manchester district. As to the happy result of their two -years' negotiations, resulting in the formation of the Commercial Road Trans. port Association, Mr. Howarth hoped that the amalgamation was simply a fire! Step in the direction of the more efficient organization of the road transport industry, and that the start wluoli had been made in the Manchester district 'would be extended on a national scale.