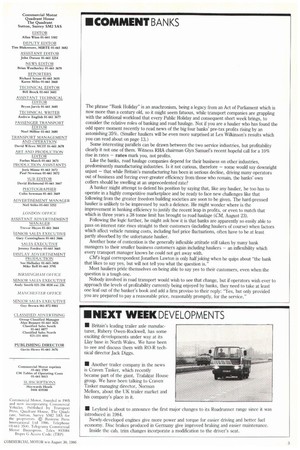 Page 5, 30th August 1986 — • COMMENT BANKS
Close
Noticed an error?
If you've noticed an error in this article please click here to report it so we can fix it.
Keywords : Haulage, Bank, Business, Business / Finance

The phrase "Bank Holiday" is an anachronism, being a legacy from an Act of Parliament which is now more than a century old, so it might seem fatuous, while transport companies are grappling with the additional workload that every Public Holiday and consequent short week brings, to consider the relative roles of banking and road haulage. Not if you are a haulier who has found the odd spare moment recently to read news of the big four banks' pre-tax profits rising by an astonishing 35%. (Smaller hauliers will be even more surprised at Lex Wilkinson's results which you can read about on page 13.)

Some interesting parallels can be drawn between the two service industries, but profitability dearly it not one of them. Witness RHA chairman Glyn Samuel's recent hopeful call for a 10% rise in rates — rates mark you, not profits.

Like the banks, road haulage companies depend for their business on other industries, predominantly manufacturing industries. Is it not curious, therefore — some would say downright unjust — that while Britain's manufacturing has been in serious decline, driving many operators out of business and forcing ever-greater efficiency from those who remain, the banks' own coffers should be swelling at an unprecedented rate?

A banker might attempt to defend his position by saying that, like any haulier, he too has to operate in a highly competitive marketplace and be ready to face new challenges like that following from the greater freedom building societies are soon to be given. The hard-pressed haulier is unlikely to be impressed by such a defence. He might wonder where is the improvement in banking efficiency to justify the recent leap in profits, or even to match that which in three years a 38 tonne limit has brought to road haulage (CM, August 23).

Following the logic further, he might ask how it is that banks are apparently so easily able to pass on interest rate rises straight to their customers (including hauliers of course) when factors which affect vehicle running costs, including fuel price fluctuations, often have to be at least partly absorbed by the unfortunate haulier.

Another bone of contention is the generally inflexible attitude still taken by many bank managers to their smaller business customers again including hauliers — an inflexibility which every transport manager knows he could not get away with.

CM'S legal correspondent Jonathen Lawton is only half joking when he quips about "the bank that likes to say yes, but will not tell you what the question is."

Most hauliers pride themselves on being able to say yes to their customers, even when the question is a tough one.

Nobody involved in road transport would wish to see that change, but if operators wish ever to approach the levels of profitability currently being enjoyed by banks, they need to take at least one leaf out of the banker's book and add a firm proviso to their reply: "Yes, but only provided you are prepared to pay a reasonable price, reasonably promptly, for the service."