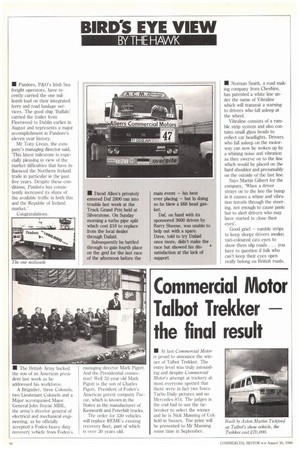 • Pandoro, P&O's Irish Sea freight operators, have recently carried the one millionth load on their integrated ferry and road haulage services. The good ship 'Buffalo' carried the trailer from Fleetwood to Dublin earlier in August and represents a major accomplishment in Pandoro's eleven year history.

Mr Tony Crean, the company's managing director said, 'This latest milestone is especially pleasing in view of the market difficulties that have influenced the Northern Ireland trade in particular in the past five years. Despite these conditions, Pandoro has consistently increased its share of the available traffic in both this and the Republic of Ireland market.'

Congratulations. • Norman Smith, a road making company from Cheshire, has patented a white line under the name of Vibraline which will transmit a warning to drivers who fall asleep at the wheel.

Vibraline consists of a rumble strip system and also contains small glass beads to reflect car headlights. Drivers who fall asleep on the motorway can now be woken up by a whining noise and vibration as they swerve on to the line which would be placed on the hard shoulder and presumably on the outside of the fast line.

Says Martin Gilbert for the company, 'When a driver strays on to the line the bump in it causes a whine and vibration travels through the steering, not enough to cause panic but to alert drivers who may have started to close their eyes'.