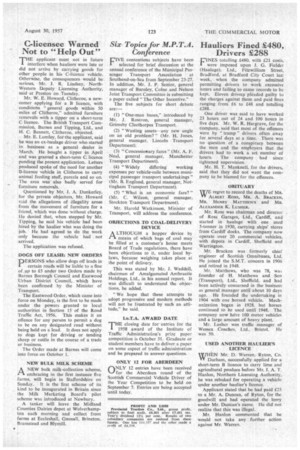 Page 37, 30th August 1957 — Six Topics for M.P.T.A.
Close
Noticed an error?
If you've noticed an error in this article please click here to report it so we can fix it.
Keywords : Logistics, Transport, Cleethorpes

FIVE contentious subjects have been selected for brief discussion at the annual conference of the Municipal Passenger Transport Association at Southend-on-Sea from September 23-27. In addition, Mr. I. P. Senior, general manager of Burnley, Colne and Nelson Joint Transport Committee is submitting a paper called "The Other Incentive."

The five subjects for short debate are:—

Mr. Harold Watkinson, Minister of Transport, will address the conference.

OBJECTIONS TO COAL-DELIVERY DEVICE LTHOUGH a hopper device by I-1 means of which bags of coal may be filled at a customer's house meets Board of Trade regulations, there have been objections to it, under local bylaws, because weighing takes place at the point of delivery.

This was stated by Mr. J. Waddell, chairman of Amalgamated Anthracite Holdings, Ltd., in his annual report. It was difficult to understand the objections, he added.

"We hope that these attempts to adopt progressive and modern methods will not be frustrated by such an attitude," he said.

Lo.T.A. AWARD DATE THE closing date for entries for the 1958 award of the Institute of Traffic Administration's prize paper competition is October 31. Graduate or student members have to deliver a paper on some aspect of traffic administration and be prepared to answer questions.

ONLY 12 FOR ABERDEEN rINLY 12 entries have been received

for the Aberdeen round of the Scottish Commercial Vehicle Driver of the Year Competition to be held on September 7. Entries are being accepted until today.