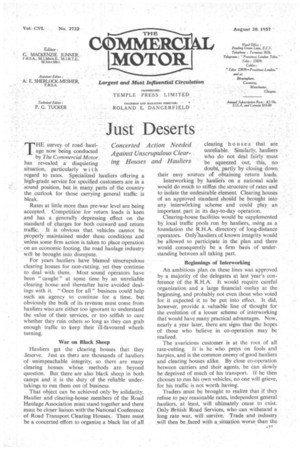 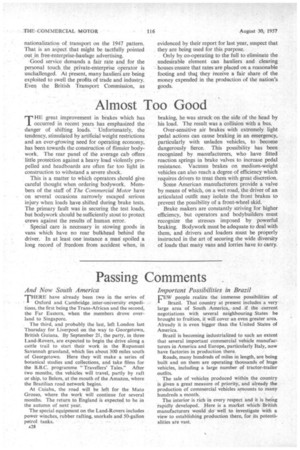 Page 29, 30th August 1957 — Just Deserts
Close
Noticed an error?
If you've noticed an error in this article please click here to report it so we can fix it.

THE survey of road haul-. age now being conducted . by The Commercial Motor has revealed a disquieting situation, particularly with regard to rates. Specialized hauliers offering a high-grade service for specified customers. are in a .sound position, but in many parts of the country the outlook for those carrying general traffic is bleak.

Rates at little more than pre-war .level are being accepted. Competition for return loads is keen and has a. generally depressing .effect on the standard of charges for both outwardand return traffic. It is obvious that vehicles cannot be properly maintained under these conditions and .unless some firm action is taken to place operation on an economic footing, the road haulage industry will be brought into disrepute.

For years hauliers have blamedunscrupidous clearing houses for rate-cutting, yet they continue to deal with them. Most sound operators have been " caught " at • sgme time by an unreliable clearing houseand thereafter have avoided dealings with it. "Once for all" business could help such . an agency to continue for a time, but obviously the bulk of its revenue must come from 'hauliers who are either too ignorant to understand the value of their services, or too selfish to care whether they ruin others so long as they can grab enough traffic to keep their ill-favoured wheels turning.

War on Black Sheep Hauliers get the clearing houses that they deserve. Just as there are thousands of hauliers of unimpeachable integrity, so there are many clearing houses whose methods are beyond question. But there are also black sheep in both campS and it is the duty of the reliable undertakings to run them out of business.

That object can be achieved only by solidarity. Haulier and clearing-house members of the Road Haulage Association must stand together and there must be closer liaison with-the National Conference of Road Transport Clearing Houses.There must be a concerted effort to organize a black list of all clearing houses that are unreliable. Similarly, hauliers Who do not deal fairly must be squeezed out, this, no doubt, partly by closing down their easy sources of obtaining return loads.

Literworking by hauliers on a national scale would do much to stiffen the structure of rates and to isolate the undesirable element. Clearing houses of an approved standard should be brought into any interwOrking scheme and could play an important part in its day-to-day operation.

Clearing-house facilities would be supplemented by local traffic pools run by hauliers, using as a foundation the R.H.A. directory of long-distance operators. Only-hauliers of known integrity would be allowed to participate in the plan and there would consequently be a firm• basis of 'understanding between all taking part.

Beginnings of Intervvorking An ambitious plan on these lines was approved by a majority of the delegates at last year's conference of the R.H.A. It would require careful organization and a large financial outlay at the beginning, and probably not even those who voted for it expected it to be put into effect. It did, however, provide a valuable line of thought for the evolution, of a looser scheme of interworking that would have many practical advantages. Now, nearly a year later, there are signs that the hopes of those who believe in co-operation may be realized.

The avaricious customer is at the root of all rate-cutting.. Iris he who preys on fools and harpies, and is the common enemy of good hauliers and clearing houses alike. By close co-operation between carriers and their agents, he can slowly be deprived of much of his transport: If he then chooses to run his own vehicles, no one will grieve, for his traffic is not worth having.

Traders must be brought to realize that if they refuse to pay reasonable rates, independent general hauliers, at least, will ultimately cease to exist. Only British Road Services, who can withstand a long rate war, will .survive. Trade and industry will then be Jaced with a situation worse than the nationalization of transport on the 1947 pattern. That is an aspect that might be tactfully pointed out in free-enterprise-haulage advertising.

Good service demands a fair rate and for the personal touch the private-enterprise operator is unchallenged. At present, many haulier i are being exploited to swell the profits of trade and industry. Even the British Transport Commission, as evidenced by their report for last year, suspect that they are being used for this purpose.

Only by co-operating to the full to eliminate the ,undesirable element can hauliers and clearing houses ensure that rates are placed on a reasonable footing and tha,t they receive a fair share of the money expended in the production of the nation's goods.